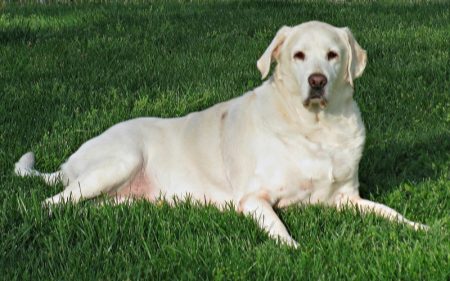 Abby, my labrador, has had environmental allergies to some extent, since she was around two years old, when she developed her first hot spot on her chest.  Yesterday, she turned nine.  Luckily, for most of those years, she’d been doing well on these supplements http://amzn.to/2oabvd7 and this shampoo http://amzn.to/2oQ9PEc.  Every year, around June, she’d go on the supplements and get her medicated baths about once a month until August or September, when the offending allergen had subsided.  We were then good until the next summer.  That was our schedule.

The Allergies – Starting earlier and earlier

Last year, after a mild winter, I expected Abby’s allergies to be worse than normal, but I didn’t expect them to start as early as they did or be as bad as they were.  Even though I had increased her dosage of the Allergy Support Supplements that had always worked well in the past, she continued to start scratching herself within two minutes of being outside, even if she never left the concrete.  By early summer, she’d suddenly developed a lipoma (a fatty tumor) on her ribcage where she’d sat and scratched herself aggressively with her back foot, even though every time I saw her scratching herself, I made her stop.   She was just so itchy, there was no way to be outside with her and keep an eye on her at all times to literally grab her foot, to stop her from scratching.   I felt so bad for her, as I increased her allergy support dosage, washed her bedding even more often, added more baths and vinegar rinses as well as coconut oil and apple cider vinegar to her food, while limiting her time outdoors as much as possible.  I even switched her to a raw diet, with little to no change in her itchiness.  As much as I dislike winter, I looked forward to it for no other reason than to give us both a break from the misery.

Fast forward to mid-February of this year and Abby was home from her one (the much larger one) lipoma removal surgery (see my post with her two-month post-surgery update here: Abby, two months after lipoma surgery) with a very large incision scar that I was monitoring closely for any signs of infection.  Because of the harsh antibiotics she was on, I was also monitoring her bathroom habits.  It was during one of her outings on about day two of being home, that Abby sat down and tried her signature scratch move with her back foot to her ribs, now home to her fresh incision.  I’d worried another mild winter would put us back in a similar situation to 2016, but I definitely didn’t expect it to start as early as February.

Despite all the awfulness that 2016 had brought to my group, including Cooper’s health scare and misdiagnosis that resulted in a 3 night hospital stay and a nearly $2,000 emergency vet bill, Stormy’s disappearance, Lacey’s single, random bizarre episode and Roxie’s illness, (all discussed here, http://savingcatsdogsandcash.com/the-truth-about-veterinarians/) I’d managed to squeeze in some research time for other possible treatments for Abby once she was out of her Allergy Support Supplements, if there was still no improvement with all the other things I was doing.

My research of bee pollen

After having remembered reading articles in the past about its ability to help with allergies and then doing even more research on the benefits and details, including how to pick it and how much to give, I decided that when Abby started showing signs of her seasonal allergies again, bee pollen seemed like the most natural and beneficial, as well as safest and most economical treatment plan. Other than possible allergic reaction, there really weren’t any negatives to trying it.

Ideally, you want bee pollen that is from your area, since you want your dog to get the exposure to the local plants and flowers that may be causing the allergy symptoms.  Unfortunately, my resources are limited being in a rural area, and time was of the essence, so I Iooked to amazon.  Based on my experience with the quality of their honey and the testimonials for their bee pollen, as well as geographical location to me, I chose this one, http://amzn.to/2owEfYU

From everything I’d read, it was very important to start out with the bee pollen in very small amounts, making sure Abby didn’t have an allergic reaction.  So as odd as it seemed, I gave my 100+ lb. labrador one little pollen granule that first day and then monitored her closely as I slowly built her up to a little more than a teaspoon 2x a day with each meal.  The results were immediate.  I kicked myself for not trying it in 2016, but instead, opting to keep giving her her Allergy Support Supplements that had worked for so long, along with the other things I was trying.  I guess I just figured that since I’d already stocked up on them, I needed to use them, never dreaming her scratching would turn into the lipoma issue (which, the vet, by the way, does not think are correlated, but I read muscle trauma can possibly cause them and find it suspicious that the exact places where she was aggressively scratching, are where her lipomas appeared).

Now that we are just past mid-April and every tree and flower in the land is blooming, I’ve noticed Abby is starting to scratch herself again a little bit.  I’ve already started increasing her bee pollen dosage a little more and if that doesn’t help, I’ll add in some Quercetin with Bromelain I have on hand.

In all my years of having cats and dogs, Abby (my only non-rescue) is my first one ever with an allergy (or lipoma) issue, so it’s been a learning curve.  I now know that as our pets age, things can change suddenly, and what has always worked well, can stop working without warning, so being nimble with treatment can possibly help prevent bigger issues down the road.

Interested in reading more about the benefits and dosing instructions of bee pollen?  Check out this Whole Dog Journal article, https://www.whole-dog-journal.com/issues/10_9/features/Bee-Honey-Products-Help-Canines_15967-1.html

Another good article on the topic is from Dr. Karen Becker, http://healthypets.mercola.com/sites/healthypets/archive/2012/06/22/pets-seasonal-allergies.aspx

Disclaimer:  I am not a vet or medical professional of any kind and the thoughts and opinions expressed here are my own based on the experience I have had with my own dog.  Each dog is different and therefore what worked for us may not work for you.

If you want to see pictures of all the animals and their antics and get little tips and tricks I share, like my FB page, https://www.facebook.com/savingscatsanddogswhilesavingcash/