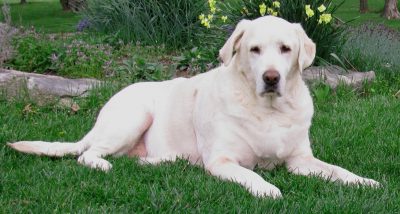 Two months ago, Abby, my yellow lab, underwent lipoma surgery.  The mass the vet removed was 12 lbs. and was encapsulated, but it had been hit and bruised, so when they performed the surgery, Abby bled heavily, causing her to have a pretty tense surgery and long recovery.

Not a typical lipoma

Unlike most lipomas, Abby’s lipoma was under muscle.  And it had grown exponentially the couple of months prior to the surgery.  Having a large mass sticking out/off of her side and going down behind her front leg was uncomfortable, restrictive and impairing her quality of life.

Even though I had switched her to raw food and had been giving her several natural supplements in an attempt to keep the lipoma from getting larger and having to put my nearly nine-year-old dog through surgery, I finally had no choice.

Up until that time, Abby and I had only ever spent one or maybe two nights apart.  To say I was nervous about the surgery is an understatement.  Aside from spay/neuter surgeries, which every animal I take in gets, I’d never had an animal need such a major surgery.  It was awful.  I prayed the surgery went ok and she was back home soon.

Abby’s absence was a preview of what life would be like someday, and I absolutely hated it.  The tragic loss of Roxie, my Great Pyrenees, to cancer in December, after 13 years together was still too fresh.  As I lay in bed and listened to the silence that used to be filled with Roxie’s random nighttime barking to warn potential intruders that she was on duty outside, and Abby’s light snoring inside, I cried tears of sadness and worry.  That immediately ran into my ears.

I knew from the vet consult that the surgery was going to be pretty serious, requiring them to cut through not only Abby’s skin but also her muscle.  I also knew that the incision was going to be big.  Abby would have to be in the hospital at least 1-2 nights.  I hated the thought of her being without me in her quiet home with her routine during what I knew would be a very uncomfortable, loud, and confusing time.

I tried my best to talk the vet into letting her come home sooner, but as serious as the surgery had been, she wanted to keep Abby from the original plan of two nights to four.  It was a very long and lonely four days.  Although I have ten animals, they are each individual personalities with their own imprint around here, and when one is gone, their absence leaves a huge hole.

Once I got Abby home, I set her up in the kitchen, the only room large enough with vinyl flooring to accommodate both her and her incontinence pad and towel covered bed.  For the first time in many, many years, she slept there instead of on her bed in the bedroom, near me.  Luckily, for the most part, she didn’t seem to mind, but I couldn’t wait for her to be healed up and our routine back.

Abby’s every bark woke me up and sent me rushing to the kitchen to check on her.  Oftentimes the bark was to basically tell on Sissy, one of the cats, who jumped barricades to suddenly start laying on Abby’s icky bed.  I would remove Sissy from the bed, change towels if necessary, help Abby get situated on her bed, then take myself back to my own bed.

The incision healed quickly, but Abby continued to drip blood from her drain opening for around two weeks.  She dripped so much blood during that time that I was sure if the trash men happened to see how many bloody paper towels and these blood-soaked incontinence pads http://amzn.to/2oRti7J (which made my life so much easier and saved my towels) were in my trash, the FBI would be knocking on my door.

Every time Abby moved, blood would drip out of her drain.  A lot of it.  This was due to there being a lot of empty space where the mass had been.  Unfortunately, her drain hole was up under her, between her chest and front leg.  That made it nearly impossible to contain the dripping and still allow her to walk to the door to go outside for potty breaks.  The only way to contain all that dripping as we went out or came in, was to barrel hug her while holding a towel to the drain hole.

Being bent over and hugging all 100+ lbs. of Abby while holding a towel up against the small opening and trying to walk was hard to do.  It also confused her so much that she just stood still, waiting for the idiot holding on tightly to let go.  Since that barrel hug plan wasn’t feasible, that meant that every time we had to go outside or come back inside, there was a bloody trail in and out of the kitchen and house.  It was lovely.

Abby gets a pressure sore

During her stay at the vet clinic, Abby developed a pressure sore on her elbow (coincidentally, one of the hardest places on a dog to try to keep a bandage on), also requiring attention when she got home.  Having never seen a pressure sore before, I was shocked to see that once the scab came off, Abby had a deep, cylindrical open wound in her elbow.

Luckily, honey, colloidal silver, antibiotic ointment, and calendula oil got her fixed up.  Besides a couple of times she’s scratched at her incision, causing it to bleed a little, she’s completely healed up and her hair is slowly growing back.  Here’s what her incision and elbow look like today:

Another lipoma surgery ahead

Unfortunately, the lipoma on her other side, also under the muscle, is continuing to grow.  I noticed after a long walk yesterday, that her elbow is hitting and rubbing on it.  It will need to be removed at some point also.  <Sigh>

Trying to avoid another expensive and nerve-wracking surgery, I had Abby on some supplements that were recommended as a possible lipoma shrinker in one of my natural healing books.  Unfortunately, after being on antibiotics for so long after the first surgery, her stomach was giving her some trouble so I temporarily stopped everything but the probiotics.  I didn’t want all of the supplements I was giving her to make her situation worse.

I’m not sure whether the pills for her lipoma were working or not, but I’ve started saving for another surgery.  I just hope the next surgery goes smoother and that’s the end of our lipoma issues.

Coincidentally, Abby’s lipomas both occurred in the two places where she had scratched very aggressively with her back feet last year when her environmental allergies were off the charts.  The vet doesn’t feel like that was a contributing factor, but I have to wonder based on what I witnessed and what I’ve read about muscle trauma and lipomas.  Here’s her lipoma at the moment:

I’ll keep you posted on when and how the next surgery and recovery goes.  For now, I’m hoping no new animals show up in the meantime and this thing doesn’t grow any more until I can at least get done paying back the money I had to borrow for the first surgery and all the extra expenses related to it.  It will be nice to see Abby lump free, hopefully once and for all.

If you want to see pictures of all of my animals and their antics, visit my Facebook page, https://www.facebook.com/savingscatsanddogswhilesavingcash/

For a (constantly being updated) list of the products I’ve bought and love or highly recommend, visit my shopping page here, https://www.amazon.com/shop/savingscatsanddogswhilesavingcash

To get updates when I publish a new post on whatever health, training or other issue I feel is helpful to other cat and dog owners, and usually is due to my own experience, sign up for notifications below. (be sure to check your spam folder)