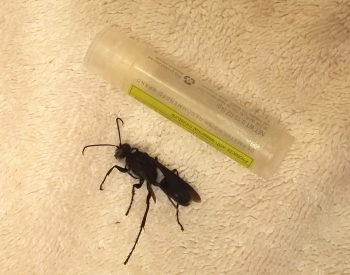 It’s been a while since I’ve shared a humorous story about my life with my animals.  Given the craziness in the world right now, it seems like a good time to share this (now) funny story that definitely wasn’t funny at the time.

Bring on the critters and creepy crawlies, but hold the wasps

Let me start by saying that I’m a country girl and have been pretty much my whole life.  Not much rattles me as far as critters or crawly things go, but I do have a very strong dislike for wasps or hornets of any kind.  It goes back to my childhood.

Growing up, I can recall at least two very distinct times where I stepped out the door and was quickly and painfully, without any warning, stung by a wasp/hornet/yellowjacket.  Both times, it turned out that my sister had been in the process of tearing down the nest a good distance away.  After my second painful and unprovoked stinging, I’d pretty much decided that I hated wasps of any kind and their lack of fairness regarding retaliation.

While I let birds and spiders and other things nest around the front of the house for natural bug control, wasps are not allowed with the exception of an occasional mud dauber.  As long as they never ever hassle me and build their nest away from my path, they usually get to stay.

However, when I see a new white paper nest being built anywhere on the house, I immediately remove it and kill any wasp(s) associated with it.  Being the jerks that they are, they always tend to try to build their nests in the doorways and then sit on the little nub of a new nest with wings flared and antennas back, looking all mad and ready to attack.

So given how vigilant I am and the fact that most of the wasps and such I do see, tend to hover higher up, what took place that August day caught me completely off guard.  Like, completely.

I’d gone into the master bathroom, which is narrow and contains a single vanity, a 1.5 person shower, and a toilet on the back wall facing the door and bedroom.  Because the bathroom window, which is nearly full length, is the last window on the end of the house, this is where we decided to put in the cat door.

The window just happens to be a few inches from the toilet and goes down to about the middle of your shin.  The cat door sits in a casing we made for it in the window, making it around knee-high.  I put a small step in front of the window for the cats to step up onto to make it as easy as possible for them to go in and out of the door, which is about 6″ x 6″.

As I sat down on the toilet to quickly do my business before proceeding with my daily activities, my cat Cooper came up and sat on the step.  Being the loving and helpful Mom that I am, I just reached over from my seat and pulled the door completely up for him to easily go through.  What happened next was like something out of a nightmare.

My fight for survival from a compromised position

As if in slow motion, a wasp or hornet or whatever it was, came through the open door as if it had just been outside watching, waiting for the opportunity to come inside.  I honestly can’t even remember now if Cooper went on out after the massive wasp or hornet or whatever it was came in, or my sudden outburst of swear words caused him to run away.  I just recall he wasn’t interested or bothered in the least about the large, slow-moving trespasser.

As I sat there in my compromised position with my heart racing watching the giant wasp thing repeatedly fly to the doorway before turning around and coming back towards me low and slow, I grabbed the nearest thing I could use to defend myself without taking my eyes off the enemy.  It turned out that was the foot towel hanging over the shower rail.  I started swinging that towel like my life depended on it, which it honestly felt like it did.

In such a tight space, I couldn’t even get a good rotation on my defensive action and was hitting the shower doors, the curtains on the window, and the blinds in my attempt to keep the wasp/hornet thing away from me.  Luckily, my frantic attempts were enough to keep diverting the intruder back towards the doorway.

To be clear, I’ve seen plenty of wasps and hornets over the years and I’d never seen one so big in my life.  It was so big, it flew lower and slower than any wasp or anything I’ve ever seen.  It was THAT big.  And scary.

With the realization that it had made a wrong turn by coming in through the cat door opening, the monster wasp/hornet thing was relentlessly trying to go back out the way it had come in.  That exit door had since been closed and there was no way I was going to let that giant thing get a few inches near me in the hope that it would just peacefully fly back out.

After a few minutes of me swinging that towel around like a crazy person every time the wasp decided to come in low and slow like a dark red 747 jet, it decided to make a couple of laps in the bedroom.  Having that extra three seconds allowed me to wrap up my potty duty and get out of the position that gave me nowhere to run.

The fight moves out of the bathroom and a victor emerges

Several minutes, a heavy-duty fly swatter that was never agile enough to kill a fly, and many swear words while ducking and dodging later, I was able to take down the murder hornet or whatever that thing was.  It had been determined to prove its stealth, but I was more determined to not let it.

Completely shook up by the ordeal and how close I came to the most embarrassing death story ever, I grabbed a chapstick container, the nearest thing I could find to use as a point of reference to the size of the monster, and texted the picture to Will.  The caption was something along the lines of “Look what just tried to kill me!”

Of course, Will and I laughed about it later and how embarrassing it would have been for him to come home and find me dead on the bathroom floor with my pants down and the wasp/hornet thing long gone, but I definitely wasn’t laughing as that scenario played out in my head while I was stuck on the toilet actually fearing that could happen.

My words of wisdom

Now that some time has passed and I’ve nearly recovered from the incident, I’d just like to pass along this friendly warning.  If you have a cat door, I’d recommend NOT opening it while you are in any sort of a compromised position.  And if you do, have a mental plan for what you’ll do if something comes through that door that you are not expecting, like a murder hornet.

*** If you enjoyed this post, I wrote a couple of other “lighter” posts about my experience with owning chickens here, and also the saga of the potty doorbell and how it was abused by the cats here.

For my list of favorite things I (mostly) own and/or recommend to fellow pet parents and occasionally random strangers, you can visit my Amazon store page here, https://www.amazon.com/shop/savingscatsanddogswhilesavingcash.

If you’d like to make a small donation to help with the ever-increasing cost to keep this site up and support my rescue efforts, here is my Paypal donation link.

2 thoughts on “Me, the cat door, and the murder hornet”