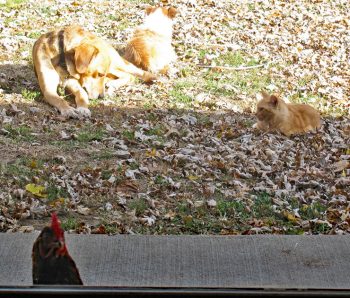 Since 2012, I’ve had dogs, free-range chickens, and cats all peacefully co-existing.  Teaching my four dogs to not bother my new chickens and then to also not bother the first cat that ever showed up was actually very easy.  The tips I use and share can be used in any household to help others have a harmonious multi-species household also.

In February 2012, I decided to add free-range chickens to my then dog-only household.  Having a large yard, I liked the idea of bug control along with fresh, healthy eggs.  Not sure what the best way to go about introducing everyone was, I went with what felt like the best way…being the example for my “pack”.

When the chicks were big enough to be outside during the day in their coop, I put the dogs on leashes and brought them all out to the coop.  I had them sit about six feet or so away and watch as I held, talked to, and interacted with the young chicks.  My goal was to show the dogs that as the pack leader, those chicks were to be treated as friendlies.

While interested at first in what was going on, the dogs soon got bored of the show.  That was my first indication that they would be fine.  If the dogs had a laser focus on the chicks as they licked their lips, whined at them, or had shown any other body language signals other than boredom, I would have been concerned.

Instead, over the course of a couple more sessions, I let the chicks out of their coop near the dogs, who once again, were leashed.  I sat amongst the chicks, talking to and interacting with them.  Again, the dogs’ interest in the chicks was short-lived and they couldn’t have cared less about them after a few minutes.

The day I let the chicks out to free-range with the dogs unleashed and doing their own thing around the yard, I stayed nearby to monitor the dogs’ reactions and intervene if necessary.  The dogs were all fine and I never had an issue with them bothering the chickens.

A couple of weeks after introducing my new chicks to the dogs, I was drawn outside one evening by the intense barking of my dogs.  I followed the barking to a cedar tree where upon closer inspection, I realized contained a cat.  In my dogs’ defense, I’m not sure any or most of them had ever seen a cat before that day.  I wrote about that day and experience here, http://savingcatsdogsandcash.com/i-used-to-just-be-a-dog-person/.  Even though the initial meeting was intense, training the dogs to leave our newest rescue alone, was easy.

Again, I showed the dogs how I was fine with the cat.  I held him, petted, him, and talked to him, just like I talk to the dogs.  The cat remained calm, as did I, and therefore, so did the dogs.  As I spent time with the cat, I watched the dogs’ body language for any signs of possible aggression.  There was none, and after a couple of weeks of close supervision, I was comfortable letting my new cat come and go around the dogs without fear of anyone bothering him.

One thing that is really important when introducing new animals is body language.  When I take in a new dog, I go into the situation blind.  I have no background whatsoever on the new dog, so being very watchful of body language helps me quickly determine possible threat levels against my other animals.  Too much interest being shown towards one of my cats or chickens is a sign that that animal needs training and that I need to keep a close eye on them.  I’m looking for a dog that shows absolutely no interest at all in a nearby cat or chicken.

Another important thing to keep in mind with dogs is pack mentality.  All it takes is one dog to start chasing a cat or a chicken to get the other dogs on board.  This can be a dog from your own household or even the neighbor’s dog.  Once the fun or excitement of chasing a cat or chicken becomes the norm, it’s a hard habit to break.  Not ever allowing the bad habit to start is much easier than trying to stop one that has started.

Nowadays, I have dogs that have been around cats and chickens for years and they all know the rules and obey them.  That makes it easier when I take in a new dog.  The new dog can just look to how the other dogs behave towards the cats and chickens to see how they should behave also.  Even then, I still closely monitor the new dog for a good while to make sure there are no signs that warrant concern or avoidable incidents.

When I take in a new cat, some have been leary of dogs and will puff up and hiss at them, which shocks and surprises some of the dogs, as they aren’t used to that.  I quickly intervene and calmly move the dog away from the cat, so as to show the dog that they need to give that cat some room.  Fortunately, just like the dogs learn from each other, the cats do too.  Once the new cat sees all the other cats walking around the dogs without problem, they quickly settle into the habit as well.

The importance of pack leadership

All of this comes down to making sure your animals know that you are the pack leader, aka ‘The Boss’.  As the pack leader, your dog needs to understand that you make the rules and are running the show.  You are responsible for the safety of your dog(s) and whatever other animal(s) you bring into the mix.

Having a dog that runs wild and doesn’t obey your commands is not a good environment to introduce a defenseless chicken or kitten/cat into.  If you need help establishing the role of pack leader, contact a dog trainer or at the very least, watch some Cesar Milan videos.

When I take in a new cat or dog, one of the first things I do to establish the fact that I am the pack leader is to teach the new dog some basic and very important commands.   Those include the ‘Sit’, ‘No’, and ‘Leave it’ commands.  My cats are also taught the ‘No’ command.

As the pack leader, I am always watching and am ready to step in if I see something that bothers me.  Sometimes it’s someone’s body language looking questionable or one of my animals potentially putting themself in harm’s way.  Whether it’s a chicken getting too close to a dog that’s eating or a cat sniffing a sleeping dog’s face, I never get complacent.

During the warm months, I’m outside a lot and have the garage door open.  The chickens will sometimes wander into the garage, where they’ll poop.  Instead of creating a scene by yelling and running them out, I calmly extend my arms out and walk them out while saying “Out”, just like I’d do with the cats or dogs.  Why that method of removal?  Because as the pack leader, I have to set an example.

If I started yelling and chasing them, causing the chickens to run, fly, and cause a commotion, the dogs would take notice, think chasing the chickens is acceptable since their “leader” is doing it, and they’d potentially join in.  Instead, by keeping calm and keeping all of the animals calm, everyone goes about their day without incident or a negative behavior being picked up.

If you have kids or other adults in the house that chase the cats, chickens, or otherwise cause any sort of commotion with them that gets the attention or raises the excitement level of your dogs, tell them to knock it off.  If you want a calm, harmonious household, you (and the other humans in the house) have to set the example for it.

Strays and the safety of my crew

Occasionally, a neighboring dog or dogs will randomly show up in or around my yard.  My own dogs usually aren’t happy to see them, so intense barking ensues.  That usually sends my cats running indoors, but to prevent any altercations, I’ll quickly and calmly bring any remaining cats and dogs inside.  I also lock the cat door to keep the cats in the house until things are under control outside.

Next, I’ll put a leash on the stray(s).  I then try to contact the owner either by information from the collar, calling neighbors with a description of the dog(s), or sending Will knocking on doors of nearby houses.

My cats and chickens are used to not being bothered by my dogs, so they don’t understand that a new dog showing up could be dangerous.  I have no idea what kind of environment these dogs come from, and the excitement and chaos in the air is always high.  Quickly and calmly rounding everyone up and securing them away from each other ensures we don’t have any problems.

By making sure you are clearly understood as the pack leader, watching body language for signs of a possible issue, and setting a good example in front of your dogs, having a peaceful coexistence with cats and dogs and even chickens, is possible.  Just remember that stopping a behavior before it becomes a habit or a tragedy is easier than stopping a bad habit, so it’s always a good idea to always be watchful of your animals’ interactions to make sure the rules are always being followed.

I have read some really awful stories about people losing cats to their pack of dogs suddenly going after them after being fine around them previously, or coming home to a tragedy.  I never stop observing body language between my animals and quickly correct anyone who needs a reminder about getting along.

With more animals comes more responsibility.  More animals require more time and attention, so please make sure you are willing to make the sacrifices and put in the effort before adding animals to your home.  People who post pictures and videos online of animals all getting along great, myself included, may make owning cats and dogs and chickens all look like rainbows and sunshine, but the reality is that it usually takes work, training, and sometimes constant supervision to achieve that.

As I’m sure you’ve noticed, I don’t clutter up my blog with ads.  I’m not a fan of them, but they do generate income, so that’s why most bloggers use them.  Instead, if you found this information helpful and would like to make a small donation to help with the ever-increasing cost to keep this site up and also support my rescue efforts, here is my Paypal donation link.