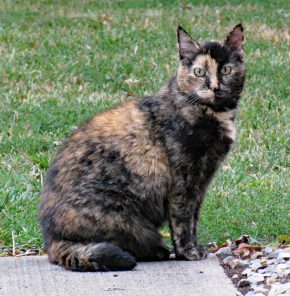 Sissy is the cat that Will and I took in in 2014 after Will’s Grandmother passed away and Sissy didn’t have any good options for a new home.  In the years following, Sissy has been extremely healthy and never needed much, if any, medical treatment of any kind from me, let alone a vet visit.

So when I woke up one morning to Sissy randomly spewing a frothy clear mucus out of the blue, I was perplexed.  Even though I watched her closely, I couldn’t tell if she was throwing up or coughing.  Sissy has so rarely thrown up over the years, I’m not even sure if she’s the type to hack for a few seconds before vomiting or if she does it without warning.

As I watched her throughout the day, trying to determine what was going on, Sissy became less and less herself.  She wasn’t seeking out attention or hanging out in her usual places.  Instead, she was retreating to behind the couch and wasn’t as interested in food as she normally is.  It was happening quickly and I was getting worried.

Even after offering her a variety of different foods, Sissy wasn’t interested in eating.  Eventually, after eating a little bit, she threw it up. That coincided with her issue being a stomach issue, but I still had my doubts.

With the weekend coming up, Sissy getting worse, and more bad weather coming in, I decided Sissy needed to get to the vet to get a diagnosis.  With the local vet being closed due to the weather, that left the expensive emergency vet as the only option.  Since the bad weather also caused Will to get off work early and I didn’t want to be gone for hours that emergency visits take, he took her while I waited at home for his update.

Probably due to the weather, Sissy was able to get right in.  They immediately wanted to run all sorts of expensive tests.  Calling Sissy “an older girl”, the ER Dr. seemed obsessed with Sissy’s issue being cancer.  Sissy is only approximately 10 to 11 years old and you wouldn’t know that by looking at her.  Will and I discussed it and agreed a blood test and x-ray of Sissy’s chest would be where we started.

According to the vet, the x-ray showed Sissy had mild asthma.  I wasn’t sure I believed that diagnosis, but at least I now knew she’d been coughing, not vomiting.  Unfortunately, all that coughing up had made eating or possibly swallowing hard for her, and she had refused to eat, throwing up what little food she’d tried to eat once.

Once Sissy was back home and I knew what I was dealing with, I set about treating her.  I started giving Sissy colloidal silver orally, which she didn’t like, and neither did I since having to administer it while wearing leather gloves is rather difficult.  While it was maybe helping her, I felt like the trauma it was inflicting on both of us made exploring other options a good idea.

Having seen oxygen-type tents recommended in animal groups I’m a member of for respiratory-type illnesses, I decided once the weather was better, I’d send Will to the store to pick up a nebulizer.  Using a nebulizer, the colloidal silver could be targeted at Sissy’s lungs and hopefully be less traumatic for her.

The nebulizer we ended up buying locally isn’t anything to brag about, so I’m not going to share a link. If our circumstances had been different, it’s not the one I would have chosen, but we needed one quickly and it was better than nothing.

To make the most of the nebulizer, I put Sissy in the cat carrier and covered it with a towel.  I then put the nebulizer up against the front of the carrier facing her face.  To keep what little steam the device produced as concentrated as possible, I placed a plastic cutting board in a horseshoe shape over the nebulizer and along the sides to funnel the steam directly into the carrier.  I then put a towel over the top of it to hold the cutting board in place and keep the steam inside.

Even though Sissy isn’t a fan of being force-fed anything, she did fine in the carrier.   She just sat there quietly and got her treatments like a princess spa champ.  I gave her the treatments two to three times a day, depending on how she was sounding.

While the nebulizing helped Sissy, she still had a little bit of an occasional cough. After more days of the nebulizer treatment and Sissy’s progress at a standstill, I went in search of something else I could easily give her to help.

I ended up finding Breathe Well and it was a game-changer.  As a matter of fact, I now keep it on hand for use at the first sign of any cough issue with anybody.  The great thing is that it can also be used with dogs, so if you have a multi-pet household, it’s one of those products that can easily be used on both cats and dogs.

The label indicates that it is for asthma and respiratory problems, kennel cough, dry and wet cough, wheezing, allergies, and irritated throat.  Some reviewers said it helped their dogs with collapsed tracheas, so it’s kind of a multi-purpose all-natural remedy.

To get the product into the cats, which was easy and didn’t require a large amount, I just put it in a little bit of canned food or mushed-up sardines.  To make sure they ate the entire food with the drops, I gave them about 1-1/2 teaspoons of food.  I didn’t have to stir the liquid in or do anything magical, I just dripped it over the food, and every cat I administered it to ate the food and remedy just fine.

The Breathe Well worked fast too.  Most times it only took a couple of dosings and there was no more coughing.

I had a couple of other cats that had been having weird bouts of single coughing episodes at specific times like one always around midnight and another one always around 4:30am.  They weren’t every day, but they were almost always at those times, despite where they were in the house.

After the breathing treatments and then the addition of the Breathe Well drops, Sissy was fine in a matter of days.  She has not had any issues with coughing since.  The other cats’ random coughing episodes were also cleared up from the Breathe Well.

Does Sissy still have asthma?  I have no idea.  Given the emergency hospital’s track record of misdiagnosing other pets I’ve taken in, I’m not sure she even had it to begin with.

I’m still not sure what caused Sissy’s sudden onset of coughing, as we don’t burn candles or use any sprays, plug-ins, or other types of air freshener or smell-eliminating/enhancing products.  We don’t smoke (anything, ever), vape, or do anything that might harm the animals in any way.

We did find during recent repair work after a water leak that we had some mold behind the wall trim from a foundation leak, but it was several years old.  I do know that mold can be a culprit, so if you are finding your animals (or yourself) constantly having respiratory issues, that might be an avenue to explore.

As I’m sure you noticed, I don’t clutter up my blog with ads because I’m not a fan of them.  However, they do generate income for those who add them to their blog.  Instead of ads, if you found this information helpful and you’d like to make a small donation to help with the ever-increasing cost to keep this site up and support my rescue efforts, you can donate through Paypal here.

6 thoughts on “How I cured my cat’s cough”