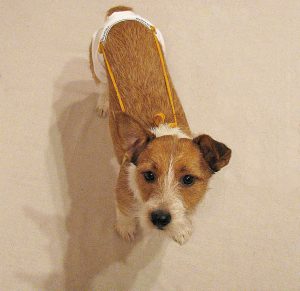 When a new dog I’d taken in went into heat, I had to scramble to come up with something to minimize the mess.  I tried the female dog diapers first, which were stocked locally and seemed like the best quick option, but they were expensive and too small.  Ordering something online would take days to arrive, and still possibly not work, so as I so often do, I went looking for a better solution that would work and was affordable.

My first dealings with a dog in heat

Back in June 2015, I got an unexpected call from one of my delivery driver’s asking me if I could/would take in a couple of dogs he had picked up.  It was late, he lived in town and already had numerous animals, so when he told me their predicament, against my usual rule of only taking in cats and dogs I find nearby, I relented.  According to the driver, the two dogs were starving and were staying at a house that didn’t want them, so the owners were shooting them with a pellet gun and letting their dog attack one of them.

Even though I’d taken in many dogs over the years, I’d never dealt with a dog in heat.  I either re-homed the dogs I’d taken in while they were still relatively young pups, or before I knew better and to prevent any accidental puppies, had my female dogs spayed before they were old enough to go into heat.  So a few weeks after I took in this male and female starving stray combo, and was still looking for signs that someone was missing them, I was caught off guard when the female went into heat.

Now that I work from home where I can monitor things, and know better about spaying too young, I do things differently.  Having gone through one heat cycle with that female and three heat cycles with Ruby, I can safely say that these homemade dog in heat/potty training pants work very well.  I even used a pair of size Small underpants on Jake (who weighed 63 lbs.) when he was neutered instead of using a cone.  They worked well to keep his incision clean and to prevent him from bothering it.

In 2016, when Ruby went into heat shortly after I rescued her, it was nice to already be prepared.  As luck would have it, both her and the other previous female dog were about the same size, so I didn’t have to make any new pants for Ruby.  And although they started out as dog in heat pants, they did also help get Ruby over the hump in her potty training.

Even though I asked her often, piled praise on her when she went to the bathroom outside, and even bought a potty doorbell to help her, Ruby was still struggling to be completely house trained.  When she went into heat and had to start wearing her dog in heat pants all the time, except when she went “out”, it all finally clicked for her.  Once she realized the pants only came off when she went outside to go to the bathroom, which required ringing the doorbell, she suddenly seemed to understand how the process worked.

If you want to read about that crazy and unexpected experience that included the cats, you can find it here, http://savingcatsdogsandcash.com/potty-doorbell/.

Fortunately, making the dog in heat/potty training pants doesn’t require any great skill or even much expense.  I used my sewing machine, but you could stitch the straps on by hand.  Besides the actual underpants I had to buy, the rest of the material I used was stuff I already had on hand.

Depending on your dog’s size, get a boy’s pair of underwear that will fit your dog’s hind end.  Ruby grew from around 11 lbs. to close to 17 lbs. during the year and a half of her three heat cycles.  She was still able to wear a Boys XS throughout that time.  Jake wore a Boys S at 63 lbs.

Put the dog harness on your dog, making sure it is adjusted properly.

Put the underpants on your dog with the front opening facing out the back.  Once you have the underpants sitting where they will be when they are attached to the harness to keep them in place, figure out where the tail will be by finding the base of the tail through the cloth and mark it with a marker.   Note: I use the front of the underpants because there are two layers of cloth with seams on each side to prevent the tail hole from ripping out and getting too large.

After you’ve marked the tail, keeping the pants in place, calculate where you’ll need your straps attached on the band of the underpants to hold them up on your dog.  Mark those places on the band with your marker.

Next, measure how far from the mark you made on the band of the underpants to where you’ll connect the strap to the harness to see how long you need your straps to be.  You want the pants to be pulled snug, but not too tight or too loose, so make sure you give yourself plenty of length on the straps to ensure that once you have them sewed on they aren’t too short if your dog grows.  If you are going to just run the straps through the harness and tie them up, you’ll obviously need them to be much longer than if you are attaching snaps, velcro or buttons.  If you are limited on time or craftiness, the tie method is probably your easiest option.  If you find it doesn’t work well for your particular dog for whatever reason, you can always alter them into velcro or snap closures, or make another pair differently and keep the tie-up ones as your spare.

Remove the underpants from your dog and cut a slit in them where you marked for the tail.  You’ll want to be able to easily get your dogs tail in and out of the hole.  (Ruby’s tail opening is not quite 2.5 inches but that is partly due to the hole growing over time through repeated use and washings).

Either with a sewing machine or by hand, sew your straps onto the band of the underpants where you marked them.

To keep the pants clean, put a panty liner inside the underwear to catch the discharge.  Change as needed.  Warning: I’m not sure if all dogs would do this, but a time or two Ruby pulled her soiled liner out and was chewing on it, so I recommend getting the non-scented ones and keeping an eye on your dog while they are wearing the pants.  You may find you have to leave the panty liner out of the pants when the dog is unsupervised, like during the night.  If having stained underpants bothers you, you can always get the colored ones that will hide the stains.  Ruby’s messing with the liner was only after it was soiled and it was as if she wanted to get rid of the smell.  Just be careful, as you do not want your dog to eat the panty liner, which could possibly cause an obstruction or illness.

Finally, put the underpants on the dog, run the straps through the holes in the harness and secure it.  Your dog can now enjoy being free around the house without making a mess.

Using as a Potty Training Tool

If you are using the pants as a potty training tool, just follow the same steps, removing the pants when you take the dog outside.  Ruby never went to the bathroom in the house while wearing the pants, so I’m not sure that the panty liner is necessary, but it probably will depend on the dog.  I did ask her very often if she needed to go “out” and if she expressed any interest at all, we went outside.  When she did go to the bathroom outside, I praised her immensely.

I recommend having at least two pairs of these pants ready for your dog so you have a pair to use while you are washing the other.  You may even want to wait a day or so before you make your second pair in case you need to make any adjustments to them.

To see all the products I have researched and use or recommend, visit my Amazon page here:  https://www.amazon.com/shop/savingscatsanddogswhilesavingcash.  I’ve included a note on each product with my thoughts about it.  Also, I make a small commission on any purchases you make through my links at no additional charge to you, which help make this blog and my ongoing rescue work possible.  Thank you for your support.