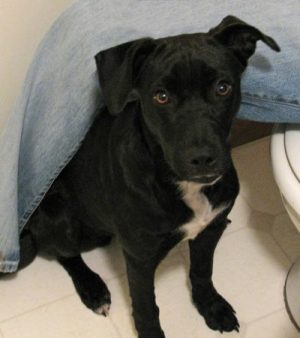 When you imagine someone dumping out a dog, you may picture it being a pit bull or pit bull mix.  Even though a lot of times the pictures or videos out there show that, I’ve only had it happen once.  It was an eye-opening and sad experience.  It is also another one of my rescues that I often think back on and wonder about.

That feeling you get

It’s a feeling I’ve felt all too often over the years.  One I can’t even really explain.  If I had to try to put this feeling into words that might be relatable to someone who’s never repeatedly found dumped or abandoned animals, I’d say it’s similar to how you feel when you realize you’ve had something stolen from you.  Shock, anger, disbelief, and sadness all rolled into a single emotion.

To this day, I still get that sick feeling every time I find a new cat or dog.  As an animal lover, it’s just so hard to believe anyone being so cold-hearted.  Even as I’ve found over the years, there are plenty of people who are, it still never gets any easier to accept.

It was no different on October 5, 2009, when as Will and I headed up the driveway, we found three pit bull or a combination of pit bull mix dogs at the end of it.  I know it was exactly October 5th because I found an e-mail dated a few days later that I’d sent to a pit bull rescue group asking for help of any kind.   It sits in my sent folder, unresponded to, to this very day.

Of these three dogs, two were females, one older than the other, both with collars, albeit too tight for their necks, and one little male that appeared to be a pup of one of the females.  Both females had identical sagging teats and all three were very thin.  Looking back, I wonder if these dogs weren’t someone’s breeding dogs that they just got tired of or had to do away with for whatever reason.

Before you think that because they had collars on, they weren’t dumped, let me explain.  Some people, whether to give the illusion of the dog just being “lost” and possibly having a better chance of being taken in, or just because they just want the dog gone, collar and all, will and do dump dogs out with collars on.  The presence of a collar is definitely not a reliable way to gauge whether the dog has been dumped or if it is just missing from its own yard.

The stark difference between these three dogs and all the dogs before, and even since, is that they were only slightly apprehensive about us getting close to them.  Most dogs that are dumped, unless they are young, are usually too scared and out of sorts from being abandoned in an unfamiliar place, to be too friendly to a new person.  While definitely not friendly, these dogs weren’t scared.

Not the usual response

I’m not sure how long the dogs had been at the end of the drive, but they’d apparently already claimed it as their own.  As we stood summing up the situation of unexpectedly finding three new dogs, a car went by on the gravel road.  The two females ran towards the car viciously barking and growling.  Their sudden aggressiveness towards that car and another one that just happened to go by a few minutes later, worried me.

As a rule, I try not to have prejudices against any breed.  I know that many times, it is the way the dog is raised that determines the behavior.  However, I also know an aggressive dog when I see one, and those two females were definitely easily set off.  Already having four dogs at the house, I didn’t really feel like I could take on any more at that moment, especially three at once.  I also didn’t want to risk my dogs being harmed by temporary new dogs that were not giving me a good feeling in my gut.  I had to make a tough decision.

Since the male was still young and did not show the signs of aggression that the females had, I decided to bring him back to the house.  I would feed him, bathe him, and find him a new, loving home.  To prevent the females from possibly clashing with my current dogs, I decided to keep them at the end of the drive with food, water, and a makeshift shelter until I could find a rescue that was more experienced with the breed that could take them.  We don’t have any barns, sheds or kennels to keep anybody segregated at the house, so this was about my only option and I really thought it would only take a couple of phone calls to get some help.

Unfortunately, finding the females a rescue or group that would take them, proved impossible.  The humane society said we could bring them over, but due to their limited resources, they couldn’t put pit bull or pit bull mix dogs up for adoption.  That option was out.  These dogs weren’t mean, as far as I could tell, and I wasn’t going to send them somewhere with an automatic death sentence, just because of their breed.  I kept calling and e-mailing.  Nobody could help or would even bother to return phone calls or e-mails.  It was very upsetting.

After a few days had passed as I kept trying to find someone who could help, the dogs suddenly disappeared.  I went to check on them, as I was doing daily, and they were gone.  They had been staying at the end of the drive the previous days, so we were immediately concerned about them.  After a quick search of the area, we returned home to check online, on the chance that someone had picked them up.

It didn’t take long to see the listing on Craig’s List showing the two pit bull/pit bull mixes that had been picked up and were being offered for free to a good home.  Slightly upset that someone would stop and take them while they were at the end of my drive when I had an area set up for them, I read on.  The people advertising them said they were dumped and were free to a good home.  Since I’d exhausted every resource in the area I could find, I told myself that if this person was nice enough to pick these dogs up, maybe they’d end up keeping them if they couldn’t find them a good home.

The questions and the struggle

I don’t know what ended up happening with those two dogs because I didn’t follow up with the poster to see.  Part of me didn’t want to know.  I was busy myself with my own dogs and trying to find the pup a good home.  To make sure he went to a responsible owner, I set up a phone interview and did an in-home visit to make sure he wasn’t going to someone who had no business with a dog or ill intentions.

Because I needed a picture to show potential new owners, I actually took one of the little guy we called Charlie.  His new owner renamed him and Will even picked him up and dropped him back off to her after we watched him for a couple of days when she had to have a minor surgery.  She sent me a picture or two of him as an adult, but then we lost contact.  The e-mail account I was using at the time crashed, losing everything pre-2013, so even if I did remember her name and wanted to check in with her, I couldn’t.  I want to believe that he’s still with her and things are great for both of them.

I often wonder about these three dogs.  This rescuing is a tough business to be in.  You’d like to keep them all, but finances, time, and other factors just sometimes aren’t in your favor.  This was the one and only time I’ve ever reached out to other people/organizations for help, and I couldn’t get any.  It was very disheartening.  Is it the norm?  I don’t know.  I like to hope not, but considering the scale of the abandoned, neglected, and abused animal crisis we have nowadays, I kind of doubt it.  From everything I see and read, most people in the rescue business are barely keeping their heads above water at all times.  Myself included.

6 thoughts on “Those three pit bulls I wonder about”