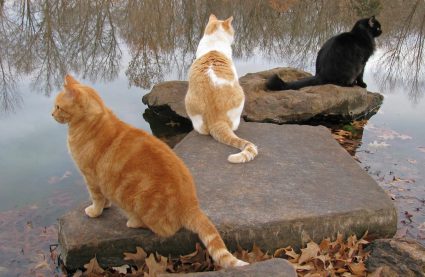 I know this is a controversial topic and it is not one that I take lightly.  My cats and dogs all mean the world to me and I’d never intentionally do anything to bring harm to any of them.  Everything I do, I try to do with their best interests in mind.  I want them all to live forever and since that’s not possible, I want the time that I do have them to be the best it can be.  After weighing the pros and cons, observance, and even discussing it with the animal communicator, who agreed with me, I’ve decided that my cats are all happiest when they are free to come and go outside as they please.

I know this situation is not ideal for everyone and probably for most, keeping the cat(s) in an enclosed porch/catio like this popular little portable one, http://amzn.to/2CtzSc8, or even on a leash like this one, http://amzn.to/2CqobUt is definitely the responsible thing to do.  Even though the cats are not allowed to come and go freely, they are at least able to enjoy the sun, fresh air, ground beneath them and all the sights and sounds of the outdoors.

Why my situation is different than most

Where I grew up, even though it was out in the country, we lived off of a somewhat busy blacktop.  Even though we had a pond, pastures, and woods behind us, for some reason, some of our animals would get out on the road.  I have no idea how many cats and dogs we lost on that blacktop during our almost 15 years there, but it was a lot.

Road location was one huge factor that drew me to my current house.  It is far off the road and that road is a gravel road that is only lightly traveled.  That’s not to say that one of the cats getting hit by a car couldn’t happen, it’s just not likely.  In the almost 18 years I’ve lived here, I’ve had one dog get a slight leg injury when it first came and apparently was still in roaming mode, while I was at work years ago.  Knock on wood, that’s been the only incident I’ve had.

Of course, having a road anywhere near you is always scary if you have pets.  If I lived in town, or close to a road, my thoughts on cats being outside on their own would probably be completely different, depending on my particular situation.  My thoughts would also possibly be different if I had close neighbors.  But since my situation is what it is, I wanted to share why my cats are allowed outside.

When I took in my first cat, KK, in 2012, he was the first cat I had ever had as an adult.  It was also a brand new experience of having a cat indoors.  As a child, we weren’t allowed to have indoor pets.  Looking back, I think my mom, whose rule it was, was completely wrong on that and it cost us more than a couple of pets over the years.  But it was a different time back then and pets, while cared for, definitely didn’t have the cushy lifestyle that most do nowadays.

The cats came and they wanted outside

KK was older, estimated at around five years of age when he showed up, and clearly used to a life outside which was evident by his ragged ears.  While mostly content indoors, he did expect to be let out when he requested it.  It wasn’t always an ideal situation, but it was manageable.  He would go off and do his thing and then come back and hang out inside until his next need for an outside visit arose.

When Julien, my 2nd cat showed up in 2013, having two cats wanting in and out at different times was more challenging.  After careful consideration, I finally decided to put in this cat door, http://amzn.to/2C8NTJl, to make everyone’s life better.  It allowed KK and Julien to come and go as they wanted without waking me up at 5 am to go outside or at 5:10 am to come back inside.  It also saved my door trim, which KK was abusing as his way of letting me know I was being too slow or not responsive at all in opening the door for him when he meowed at all hours wanting out.

When Will’s Grandmother passed away in the Spring of 2014, leaving her young indoor/outdoor cat without a viable option for a forever home, I told him we’d take her.  Once here, and being an indoor/outdoor cat also, Sissy obviously didn’t want to suddenly be cooped up indoors, either.  She also wanted to be able get away from the other two cats, as she was used to being in a single cat home.

After KK, Julien, and Sissy had all become accustomed to their life of coming and going as they pleased, that pretty much guaranteed all future cats that came along the same privilege.  In the beginning, I had no idea that would someday be seven cats.  Despite one lost cat and a recent close call in the nearly six years of allowing my cats outdoors, I feel the risk versus the reward has still been worth it.

Inside cats vs. Outside cats

The argument that it’s dangerous for cats to be outside is a very valid one.  I do agree that in most instances, cats being let outside unsupervised or unrestrained, especially in town, is extremely dangerous.  However, given where I live and my particular situation, I feel like the risks really are about as minimal as they can be.

Sadly, I know people who have solely indoor cats that have as bad or worse of a track record than I have.  My Aunt lost her 100% indoor only cat after it got its collar hung up and was strangled.  I’ve also read plenty of stories about ‘indoor only’ kitties that have been killed in clothes dryers, under chairs, from eating or drinking dangerous things, and by other accidental means.  Every time I hear about a house fire where pets were lost, I’m somewhat comforted knowing my cats have their own door (that the dogs could bust out of too, if they really wanted) if my house ever caught on fire.

I also look at this subject in the context of would I rather my cats live to age 15 or beyond and be obese, unhealthy and/or unhappy or would I rather they have possibly shorter, but ideal cat lives.  That’s a life of sunning outside, walking through the grass, catching mice and such, climbing trees, and enjoying the fresh air.  If the latter means that they will only be with me for 10 years, then so be it.  It’s so obvious every time we are outside, or as I just watch them out the window, that they love being able to not just watch the world go by from the windows, but to actually be a part of it.

If I truly didn’t think they cared much about being outdoors and wouldn’t be anxious, upset or unhealthy by being restricted to only indoors, I wouldn’t feel so strongly about it.  Having seen how happy they are to be able nap out on the concrete patio in the sun or be able to run across the yard and up a tree, or chase butterflies or each other, I just can’t possibly deny them of that.  Being able to come and go as they please has provided me with six happy, healthy, lean cats that all get along and have no behavior issues.

Keep in mind that I work from home and don’t leave very often.  When I do, it’s for usually no more than a few hours.  Because I’m home all the time, I know all the cats’ routines.  I know when they come in, when they go out, when they eat, when they nap and where they nap.  I do no less than five head counts each day to make sure everyone is accounted for.  If someone breaks routine, I notice it.  If they aren’t inside when they normally are, or in one of their sleep spots, I go out and call for them.  I also pet and pick up every cat at least once a day and check them for anything unusual.

When any of the cats are outside, it’s somewhat comforting knowing that Jake, my young and energetic mixed breed dog, is almost constantly watching or on the move around the property.  Knowing he’s out there keeping potential predators away gives me some peace of mind.  Is it a 100% guarantee of safety?  Nope.  But nothing is, including a life indoors.

Even though my cats are indoor/outdoor, most of the day they are inside sleeping or eating.  They also spend much more time indoors when the weather is anything but ideal.  If we know a storm is coming in and everyone is not accounted for, Will or I go outside and call for whoever is missing to get them back before the storm hits.  Every single cat comes when called, so although it may take a little while for them to make it back from whatever location they’ve ventured off to, they always come when called.

Letting my cats go outdoors isn’t due to my not caring or being reckless, or getting them out of my hair.  On the contrary, I let my cats go outside because I love them so much and want them to have the best life possible.  I feel like where I live and the conditions are about as safe as they can be for outdoor cats.  If I lose any of them before they make it into deep old age, then so be it.  I’d rather live 50 great years than 100 mediocre or unhealthy ones and I’m sure if they could talk, my cats would feel the same way.

I used to be a ‘dog person’.  Then one day a cat came along and my outlook on cats changed dramatically.  You can read about how it happened here, http://savingcatsdogsandcash.com/i-used-to-just-be-a-dog-person/

To see the daily antics of KK, Julien, Sissy, Rosie, Cooper, and Moose and my four dogs, check out my Facebook page, https://www.facebook.com/savingcatsdogsandcash

If you’d like to get notified when I publish a new article, sign up below (and be sure to check your spam folder)

7 thoughts on “Why I let my cats go outside”