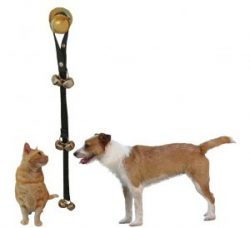 It had been years since I’d had to house train a dog, so when I took Ruby in, I’d hoped it would be as easy as I’d remembered.  It wasn’t.  Being glued to a computer working while trying to watch a sneaky little pup, was stressful and taking longer to train than I needed it to.  I honestly don’t remember how I came across the potty doorbell, whether by chance or what, but I did and I liked what I was reading in the reviews.  Those reviews just failed to mention one thing.

The basic concept of the potty doorbell is pretty simple.  You hang the potty doorbell on your door and then teach your dog to ring the bells when they need to go outside.  I’d hoped being a Jack Russell Terrier, a smart breed, Ruby would catch on quickly.  I looked forward to not having to ask her 100 times a day if she needed to go out or take her out 50 times, to try to avoid any accidents, which were small, hard to spot on the carpet and could occur in two seconds flat.

A month into training, despite me showing her repeatedly how the device worked, praising her profusely when she did ring them, Ruby was still not much further along than when we started.  Looking back, one reason I think we weren’t as successful as quickly as some reviewers had been was because Ruby is not food motivated, which was a first for me.  I’d heard there were dogs out in the world like that, but based on my own experience with a lot of dogs, I thought it was a myth.  It’s not.

Abby, my then 8-year-old lab, who I can’t even remember having an accident in the house, was not even remotely interested in suddenly learning to ring bells to go outside.  She goes out twice a day and that’s just how it is unless she lets me know otherwise.  In that case, it could be a desire for food causing The Look, or it could be a desire to go out.  Bells on the door were not going to change her game at that stage in her life.  So the old dog teaching the new dog how things work was out.

Little did I know that while I was working so hard with Ruby on the potty doorbell method, that KK, my first rescue cat, was taking notes.  Before I knew it, he was at the door ringing the bells to go out.  He, who has his own door down the hall that is available to come and go at all times, wanted the front door opened instead, at his beck and call.

Not only that, before long, KK had practically the whole house of cats using the door like I was their personal doorman.  And never did they all want out at once.  Oh no.  They preferred to wait until I just sat down or was in the kitchen with my hands dirty, to ring the bell.  These cats didn’t ring it softly, either.  They rang it like they meant business.  And repeatedly, until their request was granted.

So after a little over a month of training, I ended up with a dog that was better but still not completely housetrained and four of six cats that were using the bell like their lives depended on it to be let outside.  I had to start taking it down when I wasn’t training Ruby because the cats were abusing the bell privilege so much it was driving Will and I crazy.

At around 1-1/2 months into the training, Ruby went into heat.  Things just kept getting more and more fun.  Luckily, the previous year I’d taken in a dog that had gone into heat shortly after her arrival, so I was prepared when it happened with Ruby.  That’s when I’d made these dog in heat/potty training pants you can get the directions for here, http://savingcatsdogsandcash.com/how-to-make-dog-in-heat-potty-training-pants/.

In no time, Ruby was finally connecting that her ringing the potty doorbell meant the removal of her dog in heat pants and getting to go outside.  Something about getting the pants taken off, that had never seemed to bother her, finally drove her to use the doorbell and no longer go to the bathroom on the carpet.  Finally, it looked like everything was falling into place.

Woken up by the potty doorbell…..for food?

KK, the instigator of the whole ‘We can use the bells as a shortcut to outside’ plan, was still leading the pack of the potty doorbell abusers.  He even went so far as to ring the bells as loudly as he could one weekend morning at around 6 am because he wanted food.  Food!  He’d learned that by ringing those blasted bells, he got what he wanted.  That morning, apparently he decided he would use that power to wake me up to let me know he wanted food.

Being woken up from a deep sleep by the bells ringing loudly and groggily wondering how Ruby got out of her crate and was ringing the bells, I jumped up to investigate.  As I approached the door, I saw KK.  As soon as he saw me and apparently the unhappy look on my face, he gave me his signature look of “Uh oh”, made his little squeaky/grunting noise he does right before we chase him (one of his favorite games), and darted towards the laundry room.  Halfway there, he stopped and looked back at me, how he lets me know he wants me to follow him.

Since the laundry room is where the cats are fed, I was beginning to see what he was up to.  I’d gotten to bed super late and I had put food out for them before I went, so they would have plenty to eat until I got up.  It was STILL sitting in the bowls!  I told KK he had food and to not be ringing that bell again as I turned and headed back to bed.

Eventually, Ruby was using the bells to indicate needing to go out by softly nudging them, while the cats continued to ring them like the ship was sinking.  Repeatedly.  Once again, I had to take them off the door after I let Ruby back in so I could have a break from the craziness.  After another couple of months, I permanently took them off the door and just relied on Ruby to go to the door and then peek around the half wall at me to let me know she had to go out.

In conclusion, the potty doorbells (http://amzn.to/2vmq8Kc) are a great way to house train your dog, or for your cat to train you.  It took a little while for the cats to stop going to the door and I had to re-train KK to stop taking out his frustration at not being let out at the front door by scratching the door trim, but it eventually all worked out.  Ruby is fully house trained, the cats are back to using their own door, except for when they don’t want to, and I still have most of my sanity.  For now.

To see more antics in picture form from my ‘Life is never dull’ crew, be sure to check out my FB page, https://www.facebook.com/savingscatsanddogswhilesavingcash/

For my list of favorite things I (mostly) own and recommend to fellow pet parents and occasionally random strangers, you can visit my Amazon store page here, https://www.amazon.com/shop/savingscatsanddogswhilesavingcash.

To get updates when I post more stories, lessons learned, training and health-related, and other cat and dog (and occasionally chicken) related posts, sign up for my newsletter below.  (be sure to check your junk folder for confirmation)

8 thoughts on “The cats, the dogs, and the potty doorbell”