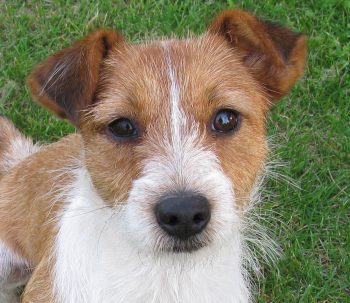 Just like all of my other posts, this one is brought to you from experience.  It involves dog eyes.  Though I always try to treat my dogs at home and as naturally as possible, injuries or issues with their eyes are one thing I don’t mess around with.  Once again, it took a bad experience for me to learn that lesson.

My first experience with eye issues

Many years and rescues ago I took in some young dogs that appeared to be blue heeler mix.  They had come to me after my sister had found them as puppies and gave them to my parents.  That arrangement had worked out fine until the puppies grew up and apparently started chasing my Dad’s chickens.  Dad was ready to do something drastic, so I took them in.

One day I noticed that Tex, one of those little dogs I’d taken in, had quite a bit of black gooey discharge coming from one of his eyes.  I looked closely at his eye, but didn’t notice anything out of the ordinary, so I cleaned it up and let it be.  I figured it must have just been an instance of dust or something irritating it.  Each day when I got home from work I would notice that the eye continued to have discharge.  Not seeing anything, I was baffled, but not overly concerned.

One day when I checked on Tex’s eye, I found that the original black goo had changed to a green color, which I knew signaled infection.  I also noticed a haze was starting to form on Tex’s eye.  Still not seeing anything that could be causing the issue, but now worried, I immediately made an appointment with the vet.

Learning about the third eyelid

Even though I had pulled Tex’s bottom eyelid out to see if there was something in his eye more than once, I didn’t know dogs had third eyelids.  That was the first place the vet looked.  There, hidden deep in that third eyelid crevice was a gooey seed head that had been in Tex’s eye for at least a week, wreaking havoc.

Of course I felt awful that poor Tex had endured what I’m sure was a very painful experience for so long.  He was the first dog I’d ever had to have any sort of an eye issue at all, so I was completely inexperienced with them.  Luckily, Tex recovered with the help of some eye ointment and I learned a valuable lesson.  It would come in handy for the next time, several years later, when I found myself with another dog with an eye issue that didn’t appear to have a visible cause.

A few months ago, my Jack Russell Terrier, Ruby, went out on one of her spirited runs and came back squinting a little bit in one eye.  Not knowing if she’d just poked or scratched it or if it was something more serious, I immediately began treating her eye with colloidal silver.  I’d place a drop or two in her eye, depending how accurate my aim was, 2-3x a day.  Despite me diligently putting the drops in, Ruby’s eye continued to be wet looking at times and she continued to occasionally paw at it.  After a few days of no improvement, I suspected debris behind her third eyelid and made an appointment with the vet.

After examining her eye and then numbing it, the vet swabbed out a small black piece of leaf or something that had gotten down behind Ruby’s third eyelid.  She credited Ruby’s eye looking so well, despite the foreign body, to my application of the colloidal silver and recommended I continue to use it for a bit longer.  Once the debris was removed, Ruby’s eye area stopped being wet and the pawing at her eye also stopped, allowing the hair she’d rubbed off around her eye to grow back.

I don’t know if it’s just coincidence or what, but both times I’ve had dogs get debris in their eye, they both have been smaller dogs.  None of my larger dogs, which is usually what I take in, have ever had an issue with their eyes (knock on wood).  I do know that it happens to larger dogs, it’s just been my personal experience to happen with the only smaller dogs I’ve ever had, for whatever reason.

I will be writing a post in the near future about colloidal silver and the many uses for it, including my own experience with it in treating my animals.  Like apple cider vinegar, I feel like if you have multiple animals, it’s a great item to keep in your arsenal for treating them.  It’s easy to administer, doesn’t hurt the animal when applied, works on so many things, and most importantly, it works very well.  You can also use it on yourself for a variety of things.  After having tried other brands, this is the brand that I prefer and use: http://amzn.to/2vBMw1j.

While a bit pricey, colloidal silver is still cheaper than a trip to the vet.  Of course that’s unless the issue at hand is an eye issue that doesn’t resolve quickly or gets worse while using colloidal silver.  Then it’s a useful tool in treatment, but it won’t cure an eye that has debris lodged somewhere in it.  If you find yourself in that situation, please err on the side of caution and get your dog, or cat if the case may be, to your vet for a thorough eye examination.

Please feel free to leave a comment with your own pet eye injury and/or treatment stories below.

To see more pictures of Ruby and the rest of the crew and their antics, be sure to check out my Facebook page, https://www.facebook.com/savingscatsanddogswhilesavingcash/

2 thoughts on “Be careful with any dog eye issues”