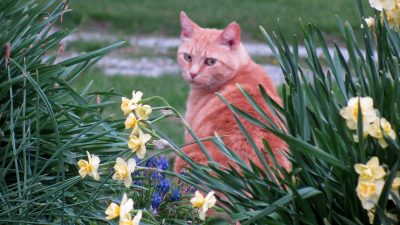 The day I rescued KK

In my twelve years of living here, I’d only seen a cat a time or two and that was from afar.  It’s not that cats probably weren’t dumped, it was just that they’d never made it close enough or been seen enough to try to catch.  That made KK’s rescue all the more unusual.

It was five years ago this week, that I was in the house early one evening when my four dogs at the time, started making a very loud commotion outside.  It was the kind of serious commotion that warranted a hasty look to see what was causing such a ruckus.  I hurried outside, expecting to see a masked man with an axe, or possibly a stray Komodo dragon in the yard.  The barking was that intense.

Now I’m not certain about this, but I am pretty confident that this was the first cat most of these dogs had ever seen and they were convinced it was a serious intruder.  They were so convinced, they had treed him and were barking like crazy dogs as loudly as they could underneath him.  I walked up to the cedar tree where the dogs were gathered, half expecting to see a raccoon or a possum.  Instead, approximately six feet up the tree sat an orange cat on a branch, calm as a cucumber.

I immediately put the dogs in the garage and went back to the tree to assess the cat situation.  To my surprise, the cat was still there.  As I gently talked to him, he calmly worked his way down the tree and walked right over to me, like we were old friends.  I was shocked.  Was he deaf?

Upon closer inspection of this brave little cat, I found him to be in pretty rough shape.  His ear was jagged, he had at least one broken tooth, he was very thin, and was covered in ticks.  I picked him up and carefully carried him to the house.  He didn’t struggle once during that relatively long trek to the house.

Having to go back through the garage to get into the house, one of my dogs, determined that this was NOT a friendly, was viciously barking and jumping up, trying to get a piece of the cat.  As I tried to calmly (so as not to yell in the cat’s face) tell my dog to get down and back off, I was afraid he was going to try to snatch the cat out of my arms.  It was very tense.  Worse yet, I expected the cat at any second, to climb up my neck and face to get away from the very loud and aggressive dog.  He remained calm and cool.  It was truly unbelievable, and an experience I will never forget.

I finally managed to work my way through the highly excited pack of dogs to get that sweet little soul into the house, where he promptly ran and hid behind the t.v. for a week.  Eventually, he came out, where I discovered that he also had worms.  After a deworming, fattening up, and checking the outlets to see if anyone was missing an orange cat, off to the vet we went for ‘Kitty Kitty’ to be checked out, neutered, and to get his shots.

It was all meant to be

Because I hadn’t implemented a ‘no more rehoming’ rule (implemented in 2013 after a heartbreaking rehoming experience) and I didn’t fully understand the potential of cats, I set about finding this cat a new home.  At that time, I still held out hope that one day I’d be able to escape the winter to a warm vacation.  Another animal would make that plan even harder.  With no outbuildings, even keeping him as an outside cat wasn’t feasible.  Luckily, as fate would have it, nobody was interested.  I finally decided to just keep him as an indoor/outdoor cat.

Training the dogs not to bother our new feline member proved to be quite easy.  Once they determined he was not a threat of any kind and saw how I interacted with him, it reinforced the whole ‘pack leadership’ role I play around here.  After a couple weeks of close supervision and monitoring, I felt comfortable letting him come and go as he pleased without worry of anyone bothering him.  No one ever did.

Calling the new cat “Kitty Kitty” seemed too feminine and generic after a while, so one day I shortened it to ‘KK’ and he came, so that became his new name.  KK went from a cat that didn’t like to be held and would wander off and do his own thing, to a cat that always comes when called, enjoys being held, and cuddling next to me or on my lap.   He has taken on one of the dogs a time or two when they get too rowdy playing near me and I know he’d fight to the death for me if he ever felt I was in real harm.

For having so many battle scars, he is one of the gentlest cats in the bunch and whenever I take in a new cat, he’s always extremely patient, accepting, and nice to them.  As the oldest cat in the group, we estimate him to be around ten years old.  I want him to live forever.  I say all of this even after the potty door bell nightmare I talked about here: http://savingcatsdogsandcash.com/potty-doorbell/

I didn’t know what I was missing

KK changed the way I feel about cats and looking back, I’m sad that it took me so long to see just how dog-like and wonderful they can be.  Somehow the universe seems to have decided to catch me up, as I now currently have more cats than dogs and I’m perfectly ok with that.  They each have their own unique personality and I wouldn’t trade a single one of them for a dog.  I’m also ok with never taking a vacation.  At this point, with so many animals now, I’d miss and worry about them all too much to enjoy myself anyway.

My advice to those of you that don’t consider yourself a ‘cat person’, just keep an open mind.  While some cats can be stand-offish and only interact on their terms, there are plenty out there that are as sweet, loyal, and as obedient (or more so) as any dog.  They can also be some of the funniest creatures you’ve ever been around.

As I’m sure you noticed, I don’t clutter up my blog with ads because I’m not a fan of them.  However, they do generate income for those who add them to their blog.  Instead of being subjected to annoying ads, if you like the content I share and would like to make a small donation to help with the ever-increasing cost to keep this site up and support my rescue efforts, here is my Paypal donation link.