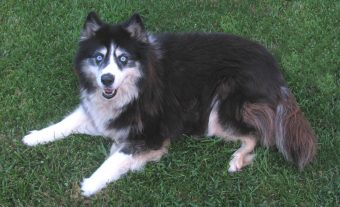 Three years ago the end of this month, a smelly, messy, long haired dog with bright blue eyes, poor treat taking manners and food aggression, showed up in the yard. In over 14 years of living here, not a single dog had ever come down the long drive to the house and hung around.  They had all stayed up on the road where there was traffic and where they had been dumped out, waiting for their owner to return. Maybe Lacey was different because she had just wandered off or was older.  Possibly, because the time was nearing when I had to let Justin, my 14-1/2-year-old dog go, Lacey was sent to help take away some of the pain.  Or maybe it was just fate for her remaining time on earth to be spent in a loving home.

Lacey, my dog of many firsts

Guesstimated by the vet who checked her out to be a 6-8-year-old Wooly Husky, Lacey was and still is, the oldest rescue I’ve ever taken in, which is about 15 of them now. She spent her first two days here seemingly depressed, wandering around the yard with her head down, ducking in and out of view and refusing to eat from any of the many bowls of food I’d set out for her in areas where I’d seen her from the window. The few times I’d stepped outside to call and talk to her reassuringly only drove her further away, so I’d decided to just be patient and keep an eye on her.

Fortunately, my other dogs were mainly staying in the garage or the house in the hot July heat, so I hoped the few times they needed out, they didn’t chase Lacey off.  Either they didn’t see her or didn’t care because everyone was fine with her.  As a precaution, I kept my normally free-range chickens locked up. The cats continued to do their own thing and knowing they were excellent climbers with about 50 trees in the yard to choose from, I felt they could escape if Lacey turned out to be a cat hater.  Thankfully, there were never any issues with anybody.

On about the third day, Lacey was laying pretty close to the house, keeping an eye on us. We had just been going about our daily routines since she’d arrived and it was appearing that she’d lost some of her apprehension towards us. Feeling so bad for this poor dog, I decided it was a good time to try to make my move.  Will and I set up lawn chairs on the patio and just talked like normal for a little while as Lacey looked on. Slowly, we moved our lawn chairs a few feet closer to her and continued our chatting. This went on until we’d moved from 40-50 feet from her to about 20.

Not wanting to lose what ground we’d gained and risk her running off, we began to toss Lacey treats. She hadn’t eaten anything since she’d arrived so we hoped her hunger would be stronger than her fear of us. Luckily, it was.

Lacey finally relented to me approaching her slowly on foot, which I did somewhat hesitantly because, to be honest, she looked kinda mean. She’d skulked around the place for the last two days, seeming very unhappy and very leery. Her eyes were cold and piercing.  I wasn’t sure what her reaction would be to me getting in her space. To my relief, her reaction was to be cautious, but accepting of the treats I tossed to her until I could get close enough to pet her.

Once Lacey realized we weren’t going to yell, hurt or whatever other awful things she was worried about happening to her didn’t happen, her demeanor brightened. Once we were acquainted and she was more relaxed, we were able to give her a good inspection. Her long hair was very matted in several places, she smelled, and her coat had a greasy film on it that got on your hand whenever you petted her.

We also discovered that she was actually wearing a collar under all that fur that was also grease covered and looked like it had been on her for her entire life without ever being washed.  Later, we’d find that she’d been spayed, which was also a first for any dog I have ever taken in.  Whatever responsible owner she’d had at one time didn’t seem to be the one she had now.

While Lacey quickly befriended us after we bribed her friendship with treats, she wasn’t so accepting of any visitors, including the mailman or other delivery drivers. She suddenly seemed to think she was a protector of me and the place and was fierce about letting visitors know by placing herself between them and the house or me. She became so fierce in her barking that I was afraid she might bite someone. Fortunately, she was all bark and no bite and eventually settled down to an acceptable level of barking when people arrived after seeing how the other dogs reacted and also apparently realizing these were people that came and went often.

Lacey’s trip to the groomer

After about three weeks of checking the newspapers, watching for lost dog signs and looking on Craigslist, it was obvious that Lacey wasn’t being looked for. Because her fur was so matted and awful, I made an appointment with a professional groomer, hoping they had a magic solution for her matted condition. At the time, I had a Great Pyrenees who was also very high maintenance and taking care of her coat was a very long and tedious task. It was made easier by the fact that I’d had her since she was a puppy, so she was accustomed to the routine and was a very easy going dog.

Lacey was more high strung, unable to sit still for very long and very panicky when it came to being brushed.  She’d either never been brushed or had been hurt from it, and wasn’t keen on allowing anyone else to do it again.

When we went to pick Lacey up from the groomer’s, the owner said because her mats were so bad, they had no choice but to shave her. Lacey looked like a completely different dog. She also acted like one.

Due to her coat being so dirty and matted for so long, she had developed a yeast infection on her skin that required several medicated baths to clear up.  This was the shampoo the vet recommended and worked wonderfully, https://amzn.to/2KRZHof.  While Lacey hated baths, she clearly loved feeling good for a change.

Even though her bottom front teeth were worn almost to the gum line and we could see gray on her muzzle, Lacey acted like a young dog with her new ‘do.  It was like the old Lacey had been replaced with a young, new, energetic and happy version.  She literally pranced around.

Lacey didn’t come without some issues though. The being fierce towards strangers was one, but the other one and one I’d never experienced before was her food related aggression. Despite being fed by herself, every day at the same times, and always getting the same amount of treats as everyone else, Lacey still seemed to believe that she had to snatch treats and fiercely guard her food.

To cure Lacey of her bad treat taking habit, I would show her the treat, but before letting her have it, I’d fold my fingers into my palm and turn my fingers and palm upwards towards her.  This prevented her from being able to snatch it aggressively out of my fingers.  Instead, she had to kind of work it out of my hand.  I’d also tell her ‘Be Nice’ firmly, as she tried to get the treat.  Once I was happy with how politely she was taking it, I’d go back to holding it between my fingers, but reminding her to ‘Be Nice’ as she reached for it.  If she had any relapses, we’d go back to her having to get it out of my hand again.

To get her over her food aggression, I would put her food-filled bowl down and then sit next to her as she ate. While Lacey gobbled her food, growling the whole time, I talked calmly to her and reassured her that I wasn’t going to, or let anyone else, take her food. It took a while, but eventually, she stopped growling and would even let me touch her bowl as she ate.

Once I was comfortable with how much improvement she’d made, and didn’t feel like my fingers would be at risk, I would drop more food into her bowl as she ate.  I wanted to show her I was the food giver and me being near her meant the possibility of more food for her, not less. It worked.  I have continued to feed her away from the other dogs, two times a day at their designated feeding times and Lacey continues to be food aggression free.

There are a number of sources out there that have recommendations how to approach food aggression, but that was my tactic. When it comes to manners, I’m a stickler.  Everybody (cats, dogs, and chickens) must get along, no growling is allowed towards me about anything, treats must be taken politely, and jumping up on people is not allowed, just to name a few.  With so many animals, I need everyone to know and follow the rules for things to run smoothly.  I also want being around them to be pleasant, not drama-filled.

Making sure your pets know that you are the pack leader is the key to having an enjoyable, well behaved dog or family of dogs.  You don’t have to be mean to show them that, either.  Just be calm, firm and consistent with them.  That is all.  It doesn’t matter how young or old or what breed the dog is, and I have had many, they all learn quickly that there are rules.  By showing them that obeying the rules equates to love, attention, play time, treats, etc., you are showing them how being good gets them good things.

I don’t know what the story is behind Lacey showing up in my yard that day, but I suspect her life before the one she now has with us wasn’t that great. It’s kind of sad to think that she may have spent many years being so uncomfortable and unhappy.  Most of the dogs I’ve taken in have been less than a year or two old and for the most part, in pretty good shape.  I’ve yet to take in one that can’t be trained to be a good dog, with just a little bit of patience and effort.   Unfortunately, that seems to be what people who dump or abandon their dogs don’t seem willing to put forth.