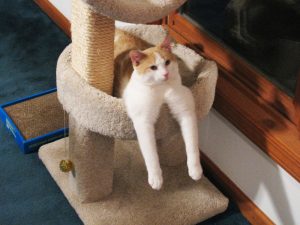 A new cat…with a diarrhea problem

Julien showed up in a tree in my yard in the middle of the night on November 28, 2013.  By all appearances, he was in excellent shape and like KK, who had shown up the previous year, was friendly and sweet, coming immediately down the tree to me when I called for him, much to my surprise.  We guesstimated Julien to be between 1-2 years old and were happy that KK would now have a companion to play with, barring he wasn’t just a lost cat, which it turned out, if he was, nobody looked for him.

Sadly, we discovered right away that quite often, immediately after Julien ate, he would have very bad diarrhea.  With no other symptoms and no blood, I felt, after it only being immediately after he ate, that it must be food-related.  Not knowing what kind of diet he’d been on before his arrival, I thought maybe the extreme and sudden change in diet was just not sitting well with him.

I was quite experienced with dogs having diarrhea when they arrived since almost all have had worms, had to forage for dead animals or whatever they could find to eat, were stressed and I’m sure on a much different quality of food than I feed.  With them, I had always had excellent luck using plain yogurt to get their digestive issues resolved quickly. This only being my 2nd cat rescue, I hoped that what had always worked for the dogs would also work for this new young cat.  Unfortunately, my good luck with using yogurt to cure diarrhea in the past stopped at Julien.

My attempts to cure Julien’s diarrhea

KK was a picky eater, getting tired of whatever canned food I’d been feeding him after about a week, so I cycled through all the foods that he would eat, hoping that one cured whatever was causing Julien’s issue.  I tried a variety of different proteins from different companies with different ingredients.

I researched possible ingredients that could be causing the issue, like carrageenan that has been used in labs to cause gastrointestinal inflammation in animals, so I avoided those foods.  I added pumpkin and slippery elm, all with little to no improvement.  During more research, I tried some liquid herbal blends, some clay-type products and spent hours online reading forums and posts about diarrhea in cats.

Not wanting to take Julien to the vet for vaccinations and neutering until he was 100% healthy, I had hoped to avoid a costly and possibly negative vet experience by fixing this issue on my own.  I finally decided after about two months of attempts, however, that whatever Julien had must be more serious than a parasite or food issue.

Since my last vet had prescribed the NSAID ‘Previcox’ that killed my dog (read that story here, http://savingcatsdogsandcash.com/previcox-killed-my-dog/) a few weeks before Julien showed up and blew me off during my dog’s adverse reaction, I had to try to find a new vet to take Julien to.  Unfortunately, since I’m in a rural area and there are no holistic or even somewhat holistic vets around, finding one that you trust, is reasonable in cost and that you get a good feeling from is very difficult.

The vet I settled on was an older vet who was old school and I was hoping with her years of practice, Julien’s issue would be an easy (and cheap) diagnosis and resolution.  After putting Julien through a lot of poking and prodding, doing a fecal exam, testing him for FeLV/FIV (feline leukemia virus and feline immunodeficiency virus), and being sent home with prescription food and meds, some of which I’d already tried, along with some medication for ear mites, we left with no conclusion to his diarrhea and $169.22 lighter in the wallet.

After trying the vet’s recommended food and products, with no relief for poor Julien, I got back online, determined to get to the bottom of this issue if it took the rest of my life.  The vet had left it basically that sometimes this just happens and used an example of a client she had that had to feed her dog pinto beans and mashed potatoes, I believe it was, to keep from having any gastrointestinal issues.

Unlike the vet and that poor dog’s owner, I just couldn’t accept the fact that this was something I couldn’t find a cure for.  The having to scramble to help him in the litter box to avoid getting his feet dirty, the foot baths, and cleaning up the floor when I/we didn’t catch him at all or on time, was tiring and only gave me that much more incentive.

A help, but not a complete cure

One thing that I did come across in all of my research that probably helped Julien the most before I finally found the culprit, was the ‘Slippery Elm Syrup’ recipe I found.  I know there are other variations on the web that probably work too, but this is the one that I found back then that worked and has continued to work quickly and well for my crew, so I’m passing it along.

It worked much better than just adding slippery elm powder to the food, as I had tried previously and had been recommended.  Besides plain yogurt and pumpkin, it’s one of my go-to remedies for diarrhea in any of my pets. There are also claims that it helps constipation as well, but I haven’t used it for that purpose, so I can’t personally attest to that.

Not knowing any better, I had bought an expensive one pound bag of slippery elm powder that will probably last my lifetime.  Unless you just need a pound of it for ongoing use, I’d recommend this smaller container of it:  http://amzn.to/2u4DSIa

Despite the slippery elm syrup helping, it didn’t completely cure Julien’s diarrhea, so my research continued.  Eventually, I ran across an article that provided new information I had not come across in all of my previous research.  It talked about the need to rotate proteins to prevent animals from developing an allergy, which I had already read about and was doing (or so I thought), but it went further.  It advised getting 100% away from any other protein during the rotation to rule out an allergy issue.

For example, if you are feeding rabbit as one of your proteins, you don’t want chicken to be a component in the ingredients.  It made sense, but as I quickly found, finding food that didn’t have overlapping proteins in the ingredient list proved to be nearly impossible and very frustrating.  Julien had been getting chicken in some form or another in every food I had offered him, even though chicken wasn’t the main ingredient in them.

In looking over the ingredients, it was a relief to see that Nature’s Logic had used pork liver and blood instead of any chicken in their ingredient list.  It looked promising, so I price shopped and then placed my order.  Within a week of receiving it and starting both cats on it, Julien’s diarrhea completely cleared up without having to use any other pills, potions, syrups or powders.  Apparently, Julien had developed a sensitivity to chicken and even the slightest little bit upset his system.

For three months, I fed the cats exclusively Nature’s Logic Rabbit to give Julien’s gut plenty of time to heal before adding chicken back into the rotation gradually.  Because I’d had such good luck with it and because both cats were doing so well on it and not tiring of it, I stuck with the Nature’s Logic line and rotated between both cats’ favorite flavors, chicken and rabbit as well as rotating in other flavors, like Turkey, and giving them water packed sardines or salmon for protein variety.

Once Julien had been diarrhea-free for two months, and I felt comfortable the worst was behind us, he went back to the vet where he was neutered and his vaccinations were given.  I told the vet what my findings were in hopes that maybe she uses that knowledge with her other patients who may have a similar situation and don’t have the time, resources or determination like I did to spend months trying different foods and products to get to the bottom of what was causing Julien’s chronic diarrhea.

If you suspect your cat may have food-related diarrhea and can’t find the rabbit version locally, you can contact Nature’s Logic for a sample to make sure your cat will eat it before you buy a case of it.  I have found the best price online for it at Chewy.com.  Both the cat and dog formulas are the same, so to save money, I purchased the cheaper dog food version.  My cats did very well on this brand until I got six cats and feeding them canned was no longer affordable.  I now feed my cats raw.

11-3-17 Update:  I recently wrote a post about colloidal silver that I believe can help with diarrhea if it is as a result of something to do with possible bacteria in the food making the cat sick.  Here’s the link to that story with the brand that I recommend, http://savingcatsdogsandcash.com/colloidal-silver/.  I’ve used it a couple of times recently along with canned pumpkin to help alleviate some temporary bouts of diarrhea in a couple of my cats that I believe was from something they ate.  Colloidal silver has so many uses though, I recommend always having it on hand.

If you want to see pictures of Julien and all of my other rescue animals and their antics, check out our Facebook page here, https://www.facebook.com/savingscatsanddogswhilesavingcash/

32 thoughts on “How I cured my cat’s chronic diarrhea”