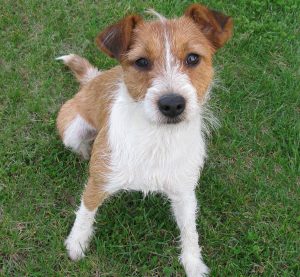 Oh, how time flies.  One year ago today, I brought this little girl home.  It wasn’t planned.  It never is.  It was another instance of making the decision to take on one more, or leave them in their (usually bad) situation and feel guilty and wonder for the rest of my life.  Of course I chose to bring her home.  I already had TEN cats and dogs at home, but when you hear how it all went down, I’m sure you’ll see why saving animals like Ruby isn’t really just something random that happens, it’s something bigger going on that I never realize at the time.  Ruby’s story is just another instance of that.

On this particular Friday, I was on my way home from getting my hair cut, which honestly, I only get done every few months because it’s money I need to spend on dog and cat beds, food, toys, spay/neuters, etc,. etc,. etc.  Especially after how awful 2016 was around here.  More about all that in future posts, though.  I can’t even remember the last time I’ve had my hair cut professionally. Summer/Early Fall of 2016, maybe?  Due to an illness in my fur family in late Fall, I had to cancel an original and then the re-scheduled appointment a couple of weeks later, and by the time things calmed down, I’d decided to just wack on it myself.  Don’t worry, it looks ok.  My hair cutting skills have improved greatly since practicing on the few unfortunate dolls I was given as a child.

So anyway, I was a couple of miles from my house when I slowed to turn down the next to last road before my house and there was a little brown and white puppy a few feet from the road, looking confused and ready to run out onto the busy blacktop.  I quickly pulled into the driveway of the house and tried to assess whether anyone even lived there.  I wasn’t sure, but I got out and walked towards the house, whistling, hoping to get the little puppy away from the road.

I finally managed to figure out what was the best door to knock at and waited.  A very elderly gentleman came to the door and after some discussion, I found out her situation.  This puppy had showed up a few days prior with another little dog and this gentleman hadn’t been feeding them in hopes that they would go away.  The other little dog had managed to get across the busy road and was nowhere to be found.  I left my name and number with the gentleman and told him that if the other little dog showed up, to give me a call and I’d take it, too.  On a side note, when I stopped back by a few days later, just to make sure the other dog hadn’t showed up, I found out that a child had taken in the other dog.  Hopefully it made it to a good home.  I’ll always wonder and hope it did.

Truth be told, most people don’t dump out or “lose” small dogs around here.  For whatever reason, all the dogs I’ve ever taken in have all been at least 50 lbs. when full grown.  So when Ruby came along, at 11 lbs., my usual routine and products had to be updated.  First thing she got was a bath, then a new bed and some toys and bully sticks to keep her busy while I worked to house train her and make sure she wasn’t just lost.  If she was, like every other dog I’ve ever taken in, nobody seemed to care enough to look for her.

As a side note, if you ever lose a pet, don’t just sit around waiting for it to come back.  Put an ad in the paper, put up signs, talk to your neighbors, check with animal control or the animal shelters near you, post on Craigslist.  It’s all very cheap and easy and can be very effective.

Now, a year later, I have to admit, Ruby has been the most trying dog I’ve ever taken in.  She’s so sweet and only wants to be loved, but she’s one degree from full throttle at all times.  She’s also very stubborn and doesn’t want another animal to come near me.  When you share a house with six cats (5 of which are lap cats) and three other dogs, there WILL BE instances of someone else wanting/needing/getting attention.  Ruby doesn’t like that AT ALL and tries to weasel her way between me and the other animal, sometimes even growling.  She also has separation anxiety, following me around the house and tearing up anything (blankets/kennel pads, etc.) inside her kennel when I have to be gone, which is usually just for a few hours at most and only very, very occasionally.  All good reasons why she may have been dumped or left missing.

Luckily, working from home and therefore able to work with her a lot and refusing to give up on her, we’re making progress.  I know her young age is playing a lot in her less than awesome behavior, but from what I’ve read, all of her “issues” are pretty common characteristics for the breed (Jack Russell Terrier or JRT), which is a great reason to make sure you do your homework before (hopefully only) adopting a new puppy or dog.  Plenty of exercise, an endless supply of bully sticks and tennis balls, with a side of floppy toys to keep her busy, and lots of patience and love seem to be working. I can’t wait to update you on her two year newhomeday and share our progress.

Here’s the little rascal now, sitting for .02 seconds before darting off again.  I asked her if she wanted a “bone” (a bully stick) to get her to sit still long enough for this picture.  And yes, that’s a little mohawk she’s sporting.

One thought on “Happy Newhomeday, Ruby!”