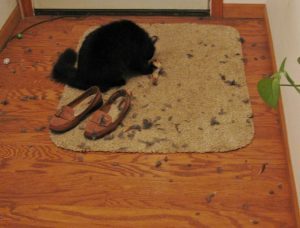 Having ten cats and dogs brings a lot of excitement to the place. What they don’t create on their own, is made up by other yahoo’s that have included raccoons, opossums, skunks and even an armadillo once, that wander into the yard. On this particular night, it was one of my own causing the excitement.

Before I get into the excitement part, let me just say that most of the excitement/chaos happens at night. Not on a warm, quiet night, either. Usually it’s a late, wet, rainy, windy or at least very cold night. Funny how that works.

Anywaaay, about 10:30pm, I was sitting in the living room, working on my laptop, when I kept hearing an occasional thumping noise. I could see in the darkness that a couple of cats had come in recently, so I just attributed the noise to them playing. I should have known better.

After hearing more thumps and starting to get concerned, I got up to check out the situation. I found this:

Yay. Thanks, Rosie. Apparently, enjoying ones catch outside isn’t as fulfilling as bringing it inside and creating as big a mess as possible. And how does one catch a bird at 10:30 at night, anyway?! Are birds just sitting out on the ground or on the lowest branches of the trees at night? Do they snore so loud they can’t hear a cat climbing up the tree? Oh! I know! The female bird is tired of the male bird’s snoring, so after shushing him 500 times, exhausted and cranky, she pushes him, causing him to screech loudly in surprise, fall off the branch, and be caught by a cat that just happens to be nearby, on lookout for ax murderers and such. Glad we got that mystery figured out.