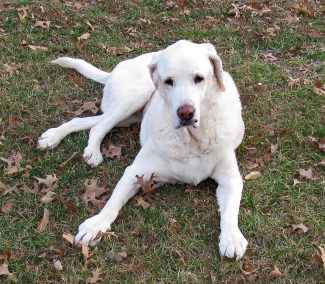 It’s now been one year since I put Abby, my senior dog who had some health issues, on the RMF Healing Diet.  This is an update on how it’s gone and why I still highly recommend this diet.

If you are new to my blog and/or didn’t read the post I wrote in March 2021 detailing the diet and Abby’s experience after three months on it, you can read it here, http://savingcatsdogsandcash.com/the-healing-diet-i-highly-recommend/.

My journey down the RMF (Rotational MonoFeeding) Healing Diet road began when I came home from the vet with my then 12-year-old Lab, Abby, in early December 2020. I had just learned that the surgery I had planned on her getting to remove the large intramuscular lipoma in her armpit area was not an option due to elevated liver numbers and an enlarged adrenal gland.

Instead of preparing for surgery, Abby was suddenly on the path to Cushing’s from her enlarged adrenal gland with the vet recommending more testing and medication.  Being extremely against using dangerous pharmaceuticals unless only absolutely necessary, I began researching what I could do to help Abby naturally.  In my research, I ran across the RMF (Rotational MonoFeeding) Healing Diet.

Even though it went against every “expert” opinion about diet and supplementation I’d ever heard or read about, it made sense.  Everything I read about it gave me hope that it was possibly finally the thing that I’d been searching so hard for that could change Abby’s declining health trajectory.  Figuring we had nothing to lose, I jumped in with both feet.

Although it seemed drastic, after reading up on how the diet worked, I reduced Abby’s meat days from seven to two and put away all of her supplements.  Her health situation was pretty serious and I really didn’t want her to develop Cushing’s.  The vet suspected possibly a tumor in her adrenal gland causing it to be twice its normal size and was surprised Abby wasn’t showing any symptoms.

One of the first things I noticed after a couple of weeks of Abby starting the RMF diet was her energy.  She had more of it.  She also became more agile and her hearing improved.  I was thrilled to see her doing so much better so quickly.  And it was all without ANY supplements!

We had no negatives with the diet in those first three months, so in March, I wrote my early assessment of the diet.  It was earlier than I normally write about things I’m treating, but Abby’s results were so good, I wanted to share the diet with other dog owners who had dogs in similar health situations.

At that time, Abby had not shown any signs of the environmental allergies she’d had for 11 years.  My other indoor dog, Ruby, an approximately five-year-old terrier mix who had no health issues, was more than happy to eat fruit I was offering Abby, so after seeing how well Abby was doing on the diet, I also put her on the diet.

In the beginning, I was feeding Abby and Ruby the recommended daily starting percentage of 5% of their body weight in fruit or sweet potato and quinoa over the course of two meals.  While Ruby will still eagerly eat anything and everything I offer her, Abby has become more hesitant.  Instead of just two meals a day, I’ve found that feeding her three or four smaller portions a day now works better for her.

I have also found an easy way to jumpstart Abby’s appetite is to give her two or three dates before offering her her bowl of fruit.  She always takes the dates with no hesitation, and will then start eating her fruit.  Some days she doesn’t eat the allotted amount of fruit or sweet potatoes and quinoa, but I don’t stress over it.  I just save it for her next fruits/vegetables meal.

Along the way, I felt both Abby and Ruby were getting a bit too thin so I increased their meat day amounts by a few ounces from my original 3% of her body weight for Ruby and 2.5% of her body weight for Abby.  That has been working well for both dogs, but I will continue to monitor them and if necessary, adjust their meat and/or fruits/vegetables percentage amounts based on detox symptoms, health issues that may arise, or how they look.

Much like being a raw feeder, no two RMF feeders feed identical because no two dogs are identical.  Tweaking the process along the way has kept both of my dogs doing well and at weights that are healthy and that I am happy with.

Overall Experience of the Diet

– Getting up and around well despite being over 13-1/2 years old with two large intramuscular lipomas in her r. armpit and l. thigh

– While none of her existing lipomas have dissolved, she hasn’t gotten any new ones

– Hearing has recently returned to how it was prior to the diet, of not being able to hear well, but may be temporary due to detoxing via her ears

– All of this was accomplished with diet alone.  Abby didn’t have a single supplement or even a bath (because it wasn’t needed) in the last year.

Fortunately, Ruby had no health issues prior to starting the diet, so I can’t give any update there, but I can say that being a terrier-type dog, she has coarse wiry hair.  Being on the RMF diet has made her hair much softer.

As far as detox or any negative side effects that have appeared, there have been few or in Ruby’s case, none.  Abby has had ear discharge, which usually also results in eye discharge.  It started as just mostly being one ear, but has progressed into both of her ears needing a weekly cleaning.  When her ears are clean, her eyes are normally clear of any discharge as well.  I’m hoping once we are through this detox, her hearing improves again.

Another development from being on the diet is now, usually after meat days, Abby will sometimes leak a little bit of urine.  She feels it and usually cleans herself up, but if I know it’s happening and she’s close enough to me that I can see the dribbling, I’ll get a paper towel and clean her up, which usually happens while she’s sleeping.  If it’s been a while since she’s been out, I’ll encourage her to go out, which helps cut down on the leaking.

For the most part, Abby’s leaking has been pretty minimal.  Since I keep pee pads on hand for things that may arise, I just put one or two under the sheets on her bed and on the floor in the area where she always lays.  Doing that prevents any leaking onto her bed or the carpet.  Both the ear discharge and incontinence are pretty common detox symptoms, according to the group.

Overall, I am still thrilled with how well Abby is doing given her age and how large and intrusive her lipomas are.  Is age still taking its toll?  Yes, and it’s very hard to watch, but at this point, I can honestly say that I feel like this diet is her best option.

While I still feel Abby’s lipomas are most likely caused by genetics, I haven’t ruled out fasting her to see if that helps in any way.  Given how out of balance they make her body, walking is difficult and exhaustive for her. I fear it will only get worse for her as she continues to age and before the sun sets on our time together, I don’t want to have left any stone unturned when it comes to trying to help her.  That’s also why I’m going to take someone’s advice from the group and look into finding an Osteopath that works on dogs.

Even if nothing else came out of this diet, the complete disappearance of Abby’s environmental allergies after so many years was worth taking the chance on this diet.  As I said in my original post about this diet, and like others who have been on the diet longer have said, I wish I’d found it sooner.  I can only wonder how different Abby’s life might have been.  It truly is a game-changer if you have an animal that is suffering.

Since writing my original post, the Facebook group has changed its name from ‘Healing Diet for Dogs and Cats’ to ‘Rotational MonoFeeding‘.  It’s still the same group and feeding protocol, the name was just changed.  Here is the link, https://www.facebook.com/groups/healingdietfordogsandcats.

In addition to the Facebook group and an e-book, the group also now has a members-only paid forum on their website, rotationalmonofeeding.com for more one-on-one help for those who need it.  A private consultation can also be purchased.

The group has a lot of rules about what is recommended on this feeding protocol and what is not, which can be offputting to some.  My advice is to join the Facebook group, look through the posts and files, including the testimonials, and decide for yourself if you are willing to put in the time and effort to follow this protocol.  While I may not completely agree with everything the group does, I do feel like Abby would not be doing as well as she is today if I had not found this diet.

As I’m sure you noticed, I don’t clutter up my blog with ads because I’m not a fan of them.  However, they do generate income for those who add them to their blog.  Instead of ads, if you found this information helpful and you’d like to make a small donation to help with the ever-increasing cost to keep this site up and support my rescue efforts, you can donate through Paypal here.