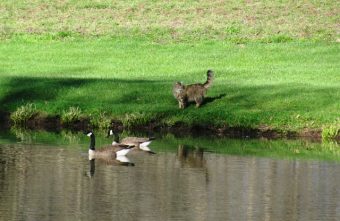 Three little ducks and two Canadian Geese had landed on the pond and were enjoying the high water and all the goodies that means for ducks and geese.  I always hear geese flying by, but usually they don’t stop.  If they do land, they are harassed by someone around here, whether it’s Jake running to the edge of the pond and barking excitedly or Ruby from her tie out, there is a sudden onset of commotion that sends the poor geese packing.  It’s something I’ve been working on, especially with Jake, but it’s kind of a double edged sword.  You see, Jake knows not to bother my chickens, who are allowed to free range around the yard.  The trouble comes with the flying birds, which has actually been a good thing.

A few months ago, I heard one of my chickens squawking and ran to the window in time to see Jake taking off after something through the yard, while looking up.  He ran all over the yard and into the nearby field, at full speed, trying to catch or chase off what turned out to be a chicken hawk.  Despite sounding like something that would get along with chickens, they actually are predators.  Apparently, this one had tried to get one of my chickens out of the front yard.  Luckily, Jake was around and on it, when duty called.  He’s done that a couple of times since, so I really can’t be too upset with him that he takes any flying thing that comes close to the house as a possible threat.  That has included cranes, buzzards and any other large flying bird that gets too close for his comfort, including geese and ducks.

Today, thinking I was going to give the poor geese and ducks a break, I tied Jake up to Ruby’s tie-out before he spotted them, and kept Ruby in the house, except for a leashed bathroom break in the opposite direction of the ducks and geese.  It was all working out until Moose spotted the resting pair on the far side of the pond this afternoon and proceeded to sorta stalk them…

By the way they slipped smoothly and quietly into the water as he walked closer and closer to them, these particular geese seemed to be used to being stalked by cats.  They just peacefully swam around a few feet from the edge of the pond as Moose looked on.  Eventually, he decided to go on about his way and they went on about theirs, including getting out of the pond and walking up into the nearby field to scour for food, leaving themselves open to stalking cats, which I have plenty of.  Luckily, I’m 77% sure that the cat door is too small for a goose to be carried through.  I’ll let you know if I end up being wrong about that.

One thought on “Tough week for the birds”