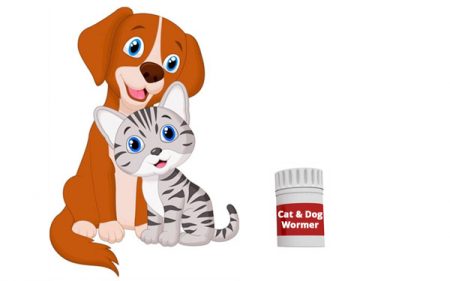 As someone who mostly writes about naturally treating my pets, you might be surprised to learn that although there are natural methods out there for treating worms, I don’t use them.  I tried the natural remedy route once and it didn’t work, so for a number of reasons, I buy conventional wormer for my cats and dogs.  The problem was finding a good product that actually worked and didn’t cost me a fortune.  After some trial and error and catching a break, I finally found a single product that works well for both my cats and dogs and is actually affordable.

Why conventional wormer is a better fit for my situation

First, let me say, that while I would LOVE to never have to put a chemical on, in, or near my pets ever again, sometimes it’s just not always feasible.  In case you are new to my blog, I currently have 10 cats and dogs (as seen in the ‘My Crew’ tab on the menu).  That’s just too many animals for me to try to keep up with alternative worming treatments.

The natural treatment methods and my experience

If you only have a pet or two and are strictly non-conventional with your worming, using products like pumpkin seeds, black walnut products, or diatomaceous earth, then all power to you.  I read up on naturally treating worms several animals ago when KK, my first rescue cat, showed up in 2012.  After doing my research, diatomaceous earth was talked up like THE product to do the trick.  After buying a large one pound bag of the food-grade magic powder, with the intention of using it for all future wormings, I went about ridding KK of his worms.

After a diligent week or so of administering the diatomaceous earth with no noticeable results (I was still seeing worms and KK wasn’t gaining weight), I broke down and decided to give him conventional wormer.  I wanted the worms gone so I could get KK fattened up from his skinny, scraggly state.  That was my first and last foray into “natural” wormers as the number of animals I’ve taken in (and have kept, instead of re-homing) has increased significantly.

Nowadays, it’s not that I’m opposed to the natural route, it’s just that with so many animals, I have to look at the cost, the time involved, and the effectiveness.  My next animal could show up tomorrow, most likely with worms, and just treating that one animal quickly and effectively before it can give them to my other animals is important to me.  As a side note, I give all of my new animals about a week of being on a good quality and consistent diet before I worm them, to give their systems a chance to adapt to so much change before essentially putting poison in them.  If anything ever seemed “off” I’d never worm them before getting them to the vet first for a checkup.

My source for an effective cat/dog wormer

Luckily, after years of buying wormer wherever I could find it cheapest, I was reading the comment section somewhere one day and someone mentioned buying their pet wormer from a company in Australia.  While it was hard to believe that buying wormer from another country could possibly be cheaper than buying it here in the United States, as anything related to my pets and saving money goes, I was intrigued.  My research began.

After reading reviews and checking prices, I decided on Vetafarm Wormout from the online Australian store, Pets Megastore.  Wormout kills all the major worm players in the game…Roundworms, Hookworms, Whipworms, and Tapeworms.  In addition to its ability to kill worms in dogs that are common for our lifestyle, I found out later that Wormout is also an effective cat wormer.  Instead of buying a separate wormer for the cats, I was able to use it on both the cats and dogs, and all for a reasonable price.

Vetafarm Wormout can be bought in a number of different formulations.  You can purchase single pills or a bottle of 100 in dosing amounts that coincide with the size of your pet.  Because I originally had several large dogs, I had the large dog version when the cats first started showing up on a regular basis after 2012.  The pills are notched, so they can be broken in half or even quarters, which is what I did.  That breaks a pill intended for a 44 lb. dog down into four 11 lb. increments when quartered, which is about where most of my cats’ weights are.

Depending on what size your cat(s) and/or dog(s) is, there are a few different pet size options you can choose from.  Here is the page that shows all of the different Vetafarm Wormout pill options, https://www.pets-megastore.com.au/index.php?route=product/search&search=wormout.

If you are in the U.S. and concerned about ordering from Australia, I can assure you that I have been ordering from Pets Megastore since 2010 with only one issue to date.  My actual charged amount to my credit card was around $1 more than my total from when I placed my order.  I sent an e-mail and received a prompt response that due to the currency exchange rate changing from when I purchased the wormer to when my card was actually charged, there was a discrepancy.  That’s been the only issue I’ve had and it was in 2010.  My orders since then have been fine, always arriving in a timely manner.  Their shipping rates have always been very reasonable as well.

While in a perfect world, going the natural route for eliminating intestinal worms would always be ideal, this is one area where I do use conventional products on an ‘As Needed’ basis.  With so many animals, buying expensive and slower working, or preventative products to naturally treat or prevent worms just isn’t an option for me.  While going the natural treatment route isn’t something I’m able to do at this time, I do encourage those that can find the time and can afford to, to at least look into it.

3 thoughts on “The unusual place I buy my wormer”