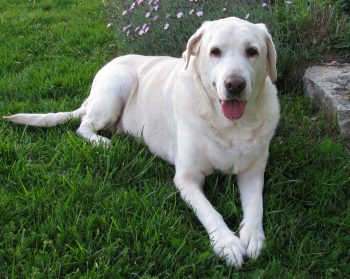 Last month, a week after my labrador, Abby, spent a night at the vet’s office following lipoma removal surgery, she developed a cough.  I let it go for a little over a day, as I waited to see if it was just a fluke since she was on antibiotics from her surgery and it was a pretty minor and only occasional cough.  Listening to her, it just appeared that she had something in her throat. She hadn’t had any bones recently and she’s a grass eater, so I thought maybe she just had a piece of grass stuck in her throat.  Unfortunately, by the next day when my scheduled post surgery check-in call with the vet came, the cough had progressed to being more frequent.

Since I have no other option, the vet that I took Abby to for both of her lipoma surgeries is conventional.  While she is a very nice and seemingly knowledgeable vet, the first thing to quickly roll off her tongue for any health issue is a pharmaceutical drug for it.  Sadly, she is still gung-ho on doing this despite me telling her previously that I now prefer to treat my pets naturally after Previcox killed one of my dogs, as I wrote about here, http://savingcatsdogsandcash.com/previcox-killed-my-dog/.

As we discussed possible reasons for Abby’s sudden development of a cough, the vet narrowed it down to possibly heart disease or kennel cough.  She gave me the number of breaths to count to rule out heart disease.  I don’t even recall the names of the medications she rattled off for treating the kennel cough, including something for the cough itself if it progressed to the point of affecting Abby’s eating and sleeping.  Honestly, she’d already lost me when drugs were her first thought to treating a pretty common ailment I know dogs get when they are around other dogs.  Instead, I told her if it turned out to be kennel cough, I had some things I’d try first.  We left it that if things didn’t improve in a couple of days when we had our follow-up visit, we’d talk about further action.

Since Abby’s breathing was fine and she had no other symptoms except a cough that had progressed a bit from the previous day, the first thing I did was head to my go-to home remedy site, earthclinic.com and see what they recommended.  After perusing what was recommended and what I had in my medicine cabinet, I pulled out my liposomal vitamin C, that I just recently wrote about here, http://savingcatsdogsandcash.com/vitamin-c-for-cats-and-dogs/.  I opened a packet of the vitamin C and gave it to Abby in some bone broth.  I also added Echinacea to the mix.

Abby had just had her 2nd surgery in six months the week before, had a nine-inch incision on her side, and now a cough, so I wanted to keep her as still and comfortable as possible.  The problem with my plan, I soon realized, is that Abby is probably one of the sloppiest drinkers on the planet.  As I held her bowl for her, she began to drink/fling a good portion of the mixture onto my face.  Later that day, about six hours after her first dose, I decided to try the bread method some users on earthclinic had discussed.  Even though Abby eats raw only, I made an exception in an attempt to get the hydrogen peroxide IN her, not on me or the surrounding area.

In the end, the method that ended up working the best for us was me adding a few drops of hydrogen peroxide to the bone broth and meat that I feed Abby twice daily.  The meat and broth combined kept the slopping to a minimum, so once I got her on a schedule after those initial tries, administering was easier.  In between her meal times, when I gave just the bone broth and hydrogen peroxide mixture to her, I moved her to the vinyl flooring where the mess from her sloppy drinking was easy to clean up.

A word of caution though about using hydrogen peroxide.  As you may or may not know, hydrogen peroxide is also used to induce vomiting, and you don’t want that.  Two to three drops of hydrogen peroxide added to about 6-8 ounces of honey water/broth should be sufficient for a medium to large sized dog, but you can read how much other users gave their smaller dogs at the earthclinic link above.

I accidentally gave Abby too much hydrogen peroxide one night when the bottle slipped as I was tipping it, giving her more than I’d planned.  I thought she’d be ok, given how big she is (95 lbs.) and how much broth was in her bowl.  I was wrong.  She ended up throwing up a few times over the course of the next 15-20 minutes and I felt AWFUL.  I’m not sure if she would have had the same reaction if she’d had food in her stomach, but luckily, she only had three small episodes and then she was fine.

At the vet’s office during her follow-up, even though my normally docile lab gets extremely excited, Abby showed no signs of a cough.  Once we’d wrapped up the visit and were paying, the vet casually asked how Abby’s cough was.  I told her it was almost if not completely, gone.  She said Abby had coughed once while she was briefly in the back having her stitches removed.  I don’t know if it was the same cough I’d been hearing, or one from the leash being pulled too tight, or what, but just for good measure, I gave Abby one last dose of hydrogen peroxide with her meal when we got home.   No further treatments were needed and once again, earthclinic.com was able to provide a helpful and effective home remedy.

If you are interested in seeing other products I’ve researched and purchased or recommend here is my Amazon page with notes added to the items sharing my thoughts/experience:  https://www.amazon.com/shop/savingscatsanddogswhilesavingcash.  Every purchase you make through my links gives me a small percentage at no additional cost to you and helps me afford to keep my blog up.  Thank you in advance for that!

10 thoughts on “How I cured my dog’s kennel cough”