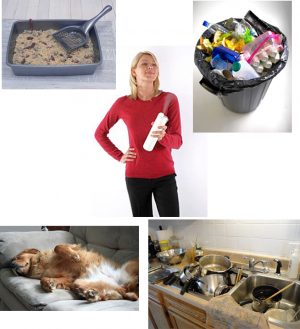 Even though the commercials would make it seem like having a smelly house is a common thing, it’s not.  And I’m going to let you in on a little secret.  Will is in the service industry.  In the course of a day, he’s in and out of usually 3-5 houses.  Because of all the commercials on TV talking about smelly odors, dog smell infused couches and stinky litter boxes, I wanted to know if it really is the epidemic the companies pushing all those sprays and plugins would have you believe.

The good news is that no, your house more than likely doesn’t smell.  There might be areas like your kitchen, your living room, or your basement, that do, however, depending on your cleaning habits.  Will says that overall, most of the houses he’s in and out of all day, for the most part, don’t smell bad.

The dangerous chemicals lurking in the deodorizers and air fresheners

Instead of using the dangerous chemical laden sprays and plugins that are pushed so hard on TV,  most of which only cover the odors temporarily, it’s best for everyone’s health to remove the source of the odor, instead of trying to cover it.  If your kitchen or the litter box stinks, spraying chemicals in the air isn’t going to fix the problem, it’s only going to temporarily mask it.  It’s also going to put toxins in the air that range from possibly causing asthma and other respiratory issues to aquatic toxicity.

I spent an extensive amount of time on the Environmental Working Group’s website looking up the various products heavily advertised on TV to combat these over-exaggerated odor claims.  Because many of the products are new(er) and/or have not been rated yet, I also decided to look up products that are advertised for ‘Pet Odors’.

Because I’ve known for years how bad those sprays and stuff are, I wasn’t overly surprised at how bad they were rated.  Saddened, yes, that people are unknowingly subjecting their pets and themselves to these chemicals in the belief that they are perfectly safe, but not really surprised.  If you aren’t familiar with just how bad for you and those around you all of these products are, you may be surprised and even saddened also.

The ratings for ‘Air Fresheners’ were a bit better, but out of 285 products and 29 brands, almost 75% of them rated either a ‘D’ or an ‘F’.  Most of the low ratings appear to be from a lack of disclosure of what exactly is in the products.  According to the Environmental Working Group’s website, air fresheners should be avoided as they can cause allergies and only cover up bad odors.  For the full listing of air fresheners and ratings, here’s the page, http://www.ewg.org/guides/categories/1-AirFresheners#.WduvkFtSzZ4

One of the biggest advertisers on TV is Febreze.  I decided to look into their ratings since their product makes contact with our and our pets’ skin and we also inhale it.  Of the 78 products they have listed, the first and only ‘B’ rated one is discontinued.  The remaining products in their line are rated ‘C’ or below.

Febreeze’s Fabric Refresher, which is actually supposed to eliminate smells in fabric, is rated a ‘C’ with moderate concern for asthma/respiratory and also the environment.  Below is the full rating from EWG.

Instead of opting for the possibly dangerous chemical route, a better plan is to clean up the source of the smell.  Will says one common easily avoidable kitchen stink he encounters is from dirty dishes sitting in the sink.  Obviously, that’s a very easy fix.  Get into the habit of rinsing your dishes and putting them in the dishwasher or if you don’t have a dishwasher, rinse the plates well so there is nothing on them to cause odors.  And don’t let them pile up.

Will says smelly trash is also sometimes an issue, but that’s a relatively easy fix as well.  By rinsing out cans and jars and also the packaging that raw meat comes in, you will be getting rid of a lot of potential odors.  Since I feed most of my crew raw, I go through a lot of those meat trays and plastic packaging.  I’ve had the best luck avoiding problems with odors by rinsing the trays and plastic with water before I toss them.

Sometimes the trays use the soft absorbing pads that don’t allow for easy rinsing and can hold liquid, potentially creating stink the longer it sits in the trash.  In those cases, I either toss the rinsed tray in the trash can we keep in the garage for things we don’t want in the house trash cans, or I’ll put the trays in the deep freeze to keep frozen until trash day.

If you and your dog(s) already have an agreement that they get to be on the unprotected couch, you still have a couple of options for getting rid of the dog smell without using questionable chemicals.  One is to use baking soda liberally sprinkled on the surface followed by a good vacuuming.  I’ve read to let the baking soda sit anywhere from 15 minutes to overnight, so depending on how bad the odor is, let that be your guide, but the longer you can let it sit, probably the better it will work.

Fortunately, I’ve never had to worry about cleaning my furniture because my dogs are not allowed on the furniture and the cats have towels to lay on that are easily washed.  Instead of on the furniture, I have several dog beds and sheets throughout the house for the dogs to lay on.  You’d be amazed at how much hair, dirt, and debris animals actually get on things, even with pretty limited outdoor time.

The #1 odor you may have if you have a cat

Sadly, the number one thing Will says he notices more than anything else in homes he goes into is litter box odor.  Apparently, there is a lot of truth to those offensive litter box smell commercials.  For those that find cleaning the litter box and disposing of the dirty litter a chore, in my research, I found you a possible solution.

It’s a litter genie that collects the used litter droppings and holds them smell-free until the inner bag is full and can be neatly disposed of.  It got very good reviews and should not only help you easily keep on top of daily litter box cleanings, which will also prevent your house from smelling bad, but also help ward off any litter box issues your cat develops from wanting to avoid using a dirty litter box.  You can check it out here, http://amzn.to/2g5bqVr.

My cats prefer going outside to do their business, but when they do occasionally use one of the litter boxes indoors, it is quickly and easily either flushed or scooped.  The main litter box I keep in the house is near a toilet, so when I see someone has used that litter box, thanks to this flushable litter, http://amzn.to/2yTX3XH, I can quickly flush it and be done with it, which I LOVE.

The flushable litter is pricey, so instead of throwing it out and starting with a new batch when it gets low, because it’s not a high-use litter box, I will add some baking soda to the remaining litter along with fresh litter and that keeps there from being any odor issues.  For the conventional litter box in the garage, where my weird cats like to hang out, I check it every few days, remove the few droppings it usually contains that I store in a small container with a tight-fitting lid until full, then dispose of.

Avoid the toxins and enjoy the smell of clean

Whatever extra work or time it may take to rinse the cans, jars, and dishes, clean the couch regularly, or empty the litter box daily, it is worth it not to expose yourself, your family, or your pets to the unhealthy chemicals that room and fabric deodorizers and air fresheners contain.  We already have so many toxins in our lives, it’s just not worth the potential health risk to add any more unnecessarily.  So skip the sprays, refreshers, deodorizers, and plugins and instead eliminate the source of the smells and enjoy the plain old smell of clean.